I was at Tumeke Cycle Space the other day (either selflessly helping someone or standing uselessly around) when I mentioned something about “cycling through the Hunuas”. Guy pointed out that I hadn’t really cycled through the Hunuas – I had cycled around them. Ok, I thought, fine I thought, I’ll show you who can ride through them. So on a rainy Saturday morning, I packed a couple of peanut butter & cheese sandwiches in to my bag, filled 3 waterbottles and got on the train. I disembarked in Papakura and rode off up the hill to Hunua, and then down towards the dams. I hung a left in to Moumoukai Rd and visited the Wairoa Dam. 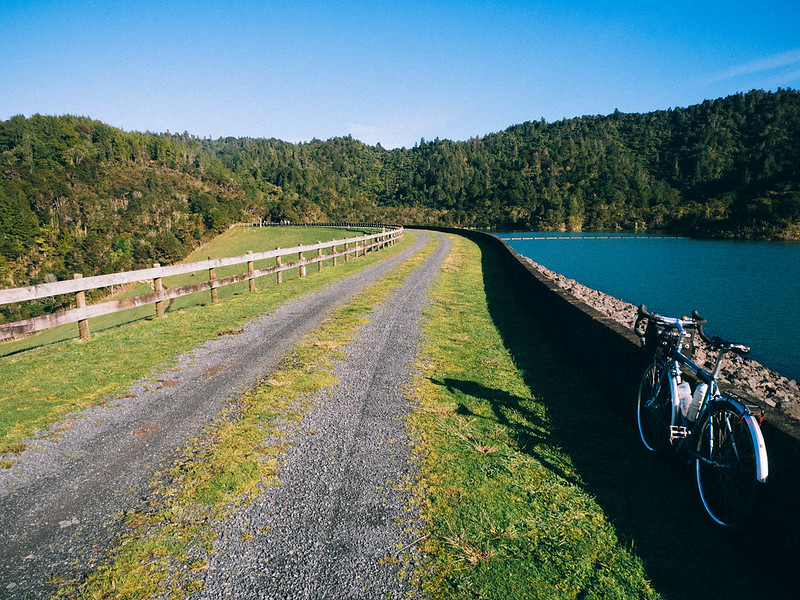 After basking in the morning sunshine for a bit, I followed the gravel road to the scenic Upper Mangatawhiri Reservoir. 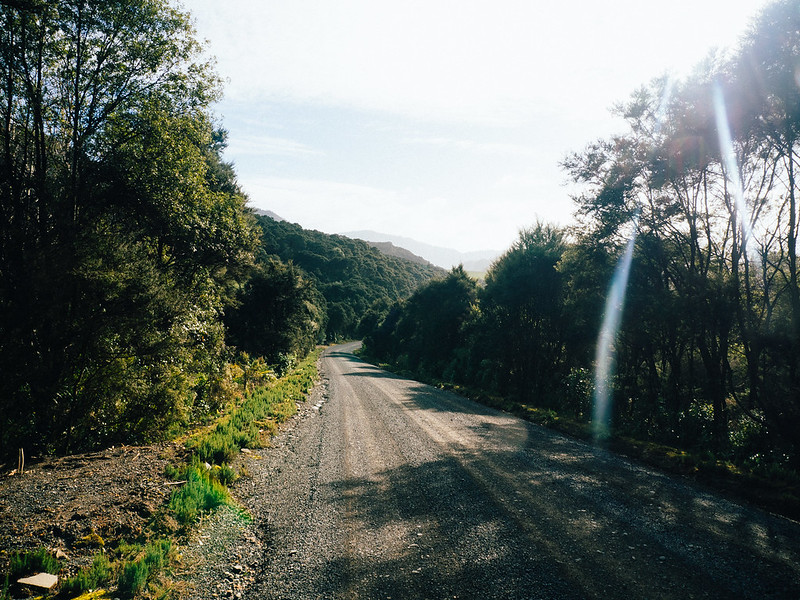 At the western end of the dam, I rode along the unexpectedly beautiful Waterline Rd. 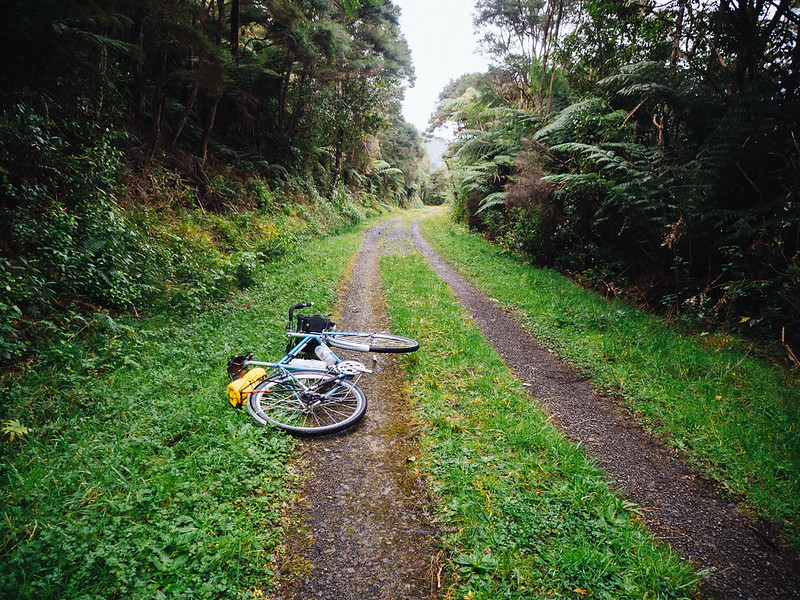 As I puffed my way to the top of the hill, it started to rain. So I had a little break. I ate a sandwich, put my jacket on and then remounted my bike & turned right on to Keeney Rd, which was a much less pleasant grade of gravel. 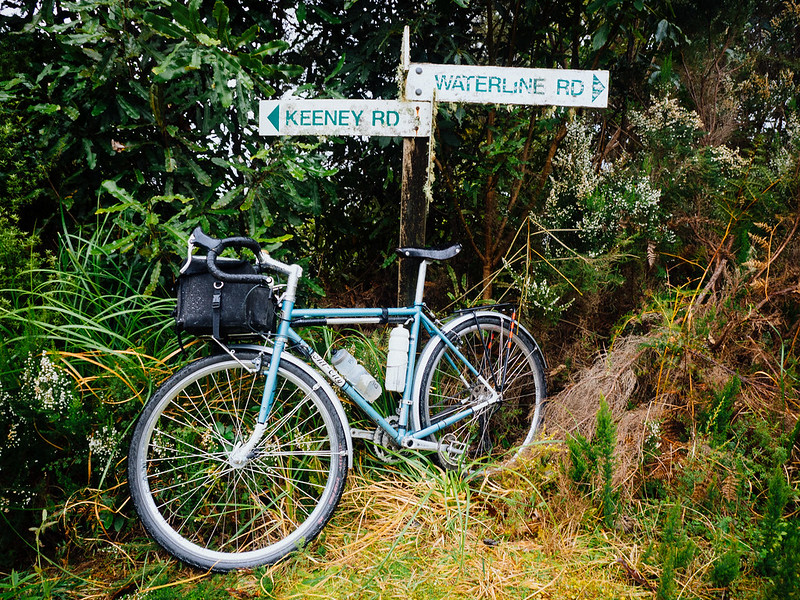 If the rocks are the size of cricket balls, is it still gravel? I’m not sure if bicycles are really welcome on that road – I saw some signs with bikes on, some signs with bikes with lines through them. Also the native bush had turned in to pine plantation, so I suspect that some logging goes on here sometimes. 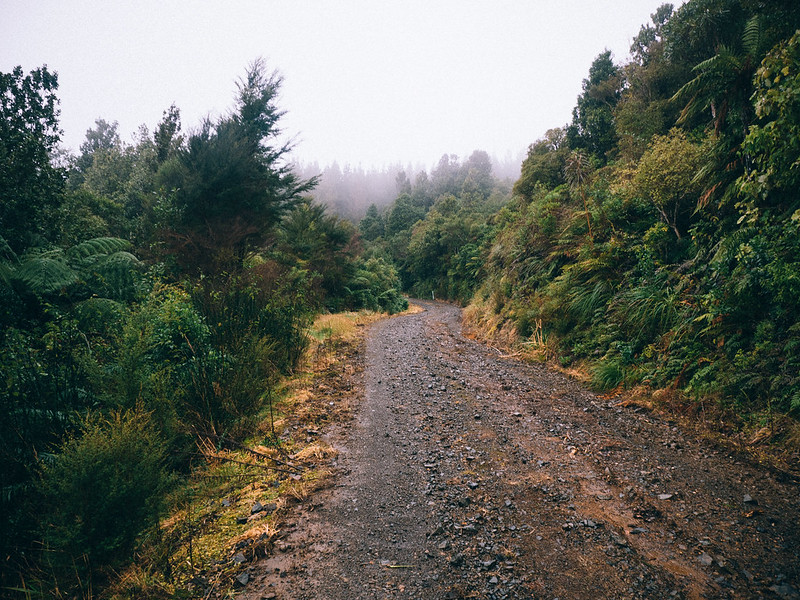 Eventually the road improved and I emerged from the forest in the artisanal Ness Valley. I could tell it was the Ness Valley because I saw some artisanal water buffalo. I also rode through a monkey’s wedding, and set a record for slowest ever Strava ride through the area (hurrah!). 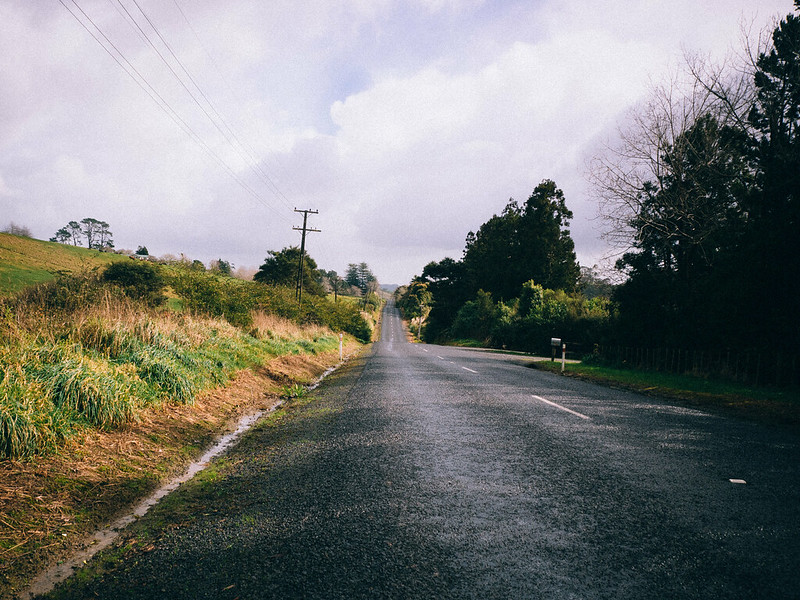 Cycling from there to Papakura seemed like hard work, maybe there was a headwind, maybe I was just tired. But when I actually got to Papakura it felt too early to get on the train, so I thought I’d ride home. I’m not very familiar with that part of Auckland so I took the simplest route north – the Great South Rd. Which started off ok with some cycle lanes, but they disappeared around Te Mahia, and the local car drivers started to get a little too aggressive. So I ducked off to the Te Mahia railway station, which I think might be the horriblest railway station in Auckland. 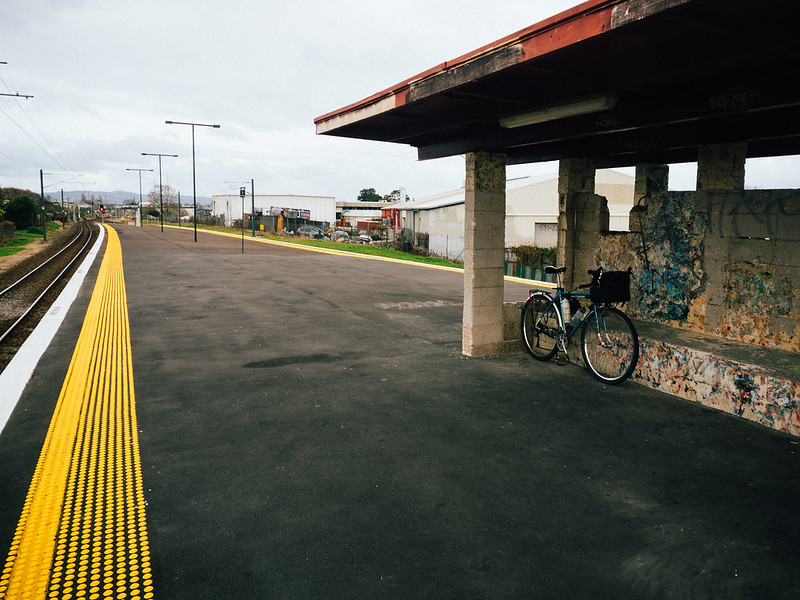 After about 20 minutes a train arrived and took me safely north to Puhuniu, where I got off to go looking for a shortcut between McLaughlins Rd and Prices Rd. I had tried to find this before, searching from Puhunui Reserve, but without success. After circling the area for some time, going in all sorts of wrong directions, I finally found the entrance to a reserve off Aerovista Place. 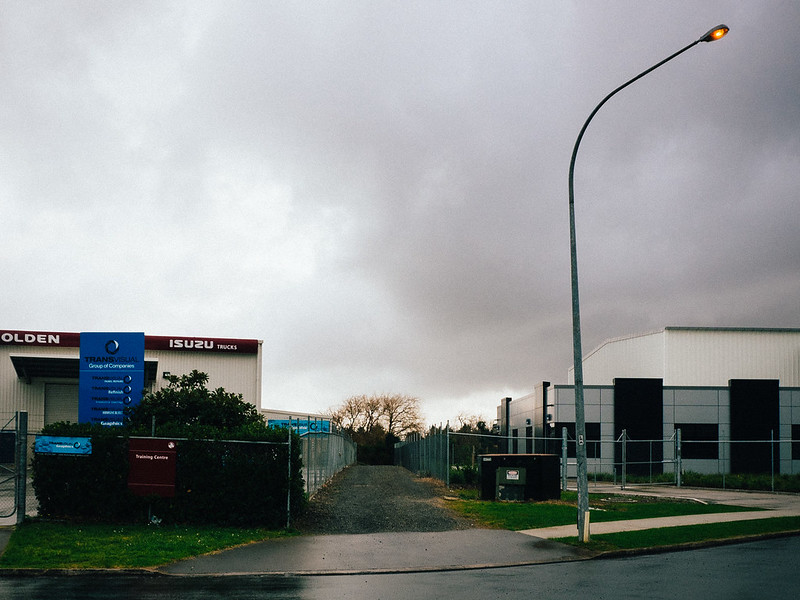 My joy at finding it was somewhat tempered by the fact that it’s not a very nice reserve. There was a bundle of clothes in the bushes that I at first assumed was a dead body, then there was a scary bridge (that could easily have trolls living under) leading to a dead end. 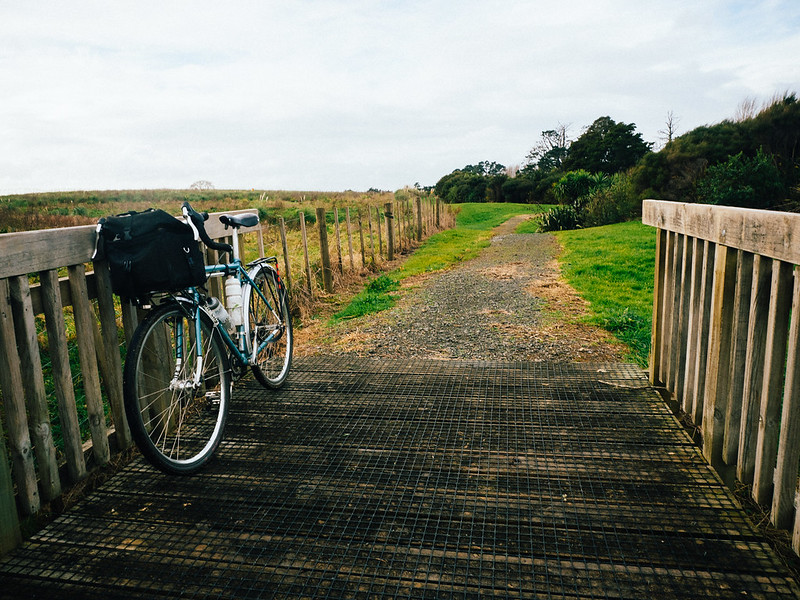 I eventually got on the right path, that turned out to be signposted as part of the Te Araroa Trail(!). But after a few minutes the trail ended and the place where the shortcut should have been, turned out to be a big muddy field with sheep in that I had to push my bike across. At the other side of the field, I lifted my bike over a fence, climbed over myself and found a sign telling me I had just crossed some private property. So I give up, there’s no shortcut. 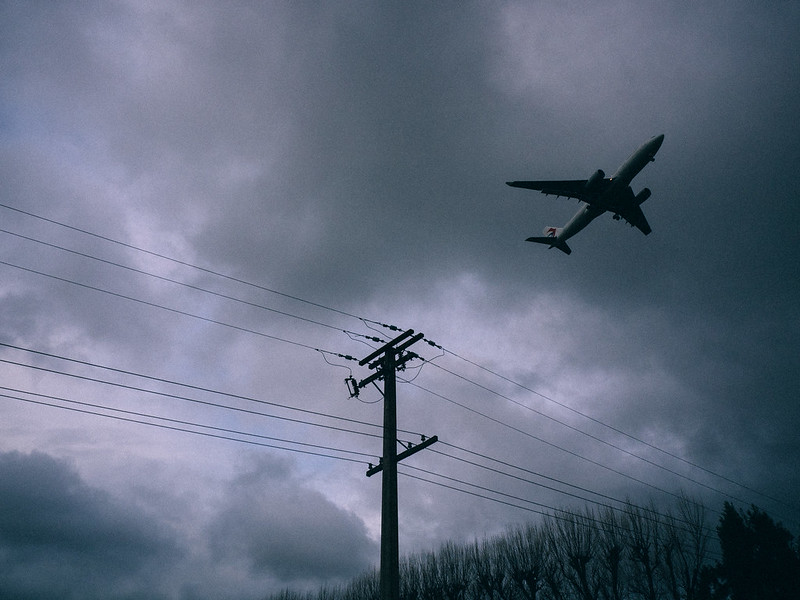 Prices Road was nice enough though, with it’s alpacas, horses and aeroplanes. And then I just had to ride the back way through the airport, and through Mangere & Onehunga back to town. 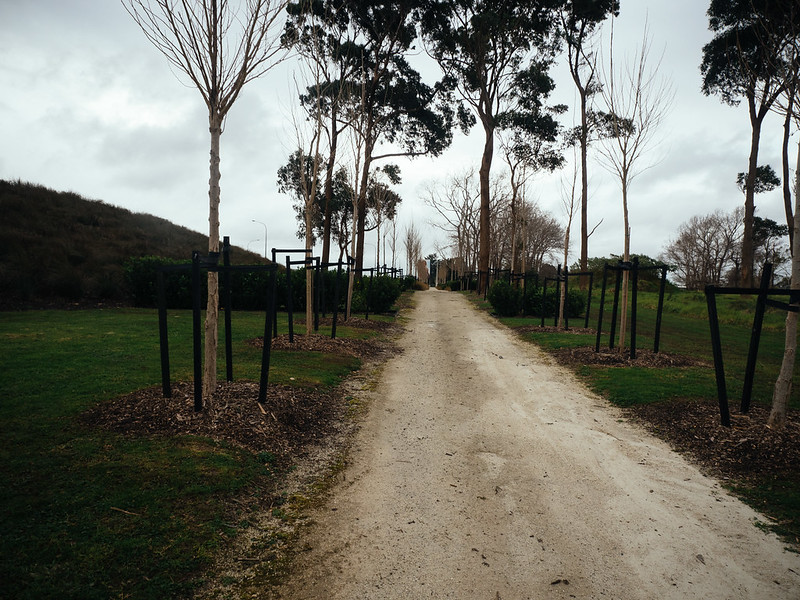 So I think that a) there’s definitely more exploring to be done in the Hunuas, and b) I really need to find a better route from Papakura in to town.

As I may have mentioned before, I’m not really a summer person. Hot weather makes me whiny and listless. Occasionally I venture out on my bike, but such outings often end in humiliation thanks to my tendency to sweat a lot. Witness a recent ride out to The Trusts Stadium in Henderson on a sunny afternoon – upon my arrival an acquaintance asked if it was raining outside (because I was all wet). It wasn’t. But when autumn was rumored to have begun, it seemed like a good time to go for a long ride. Somewhere new perhaps – how about Papakura to Miranda & back? 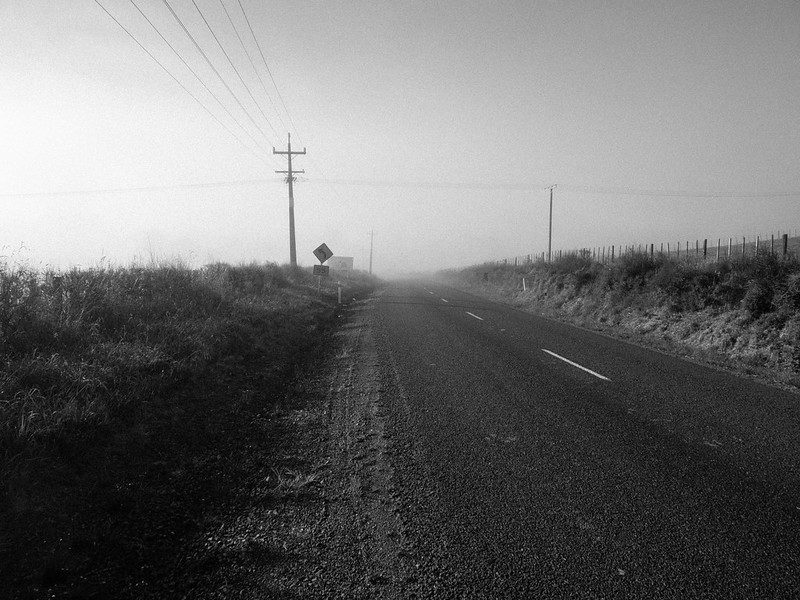 I duly caught the train to Papakura early on a Saturday morning and rode off in the direction of the Hunua Ranges. It was a beautiful morning. The sun slowly rising in to a clear blue sky, mist nestling in the valley, magpies were quardle oodle ardle wardle doodling all around. All this peace was regularly shattered by trucks bellowing their way up to the Hunua Quarry. Once I got past the quarry the road was quieter, and it was a pleasant ride up to the top of the Hunuas and down though the Paparimu valley. 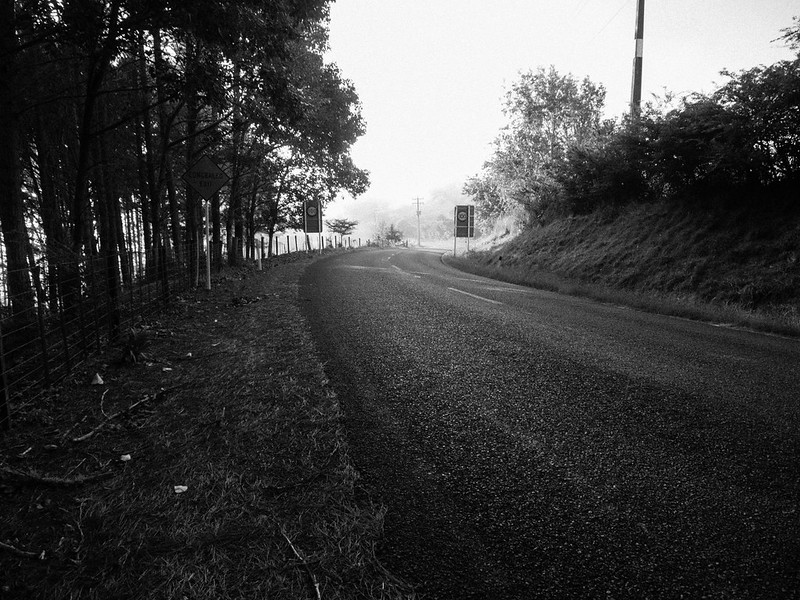 There was some confusion and riding in circles when I reached Lyons Rd, because the route I had planned on Ride with GPS told me to go straight ahead. But in the real world there’s no actual road there. It wasn’t a huge deal, but although I’ve heard of theses GPS-type issues, I’d never come across one before. 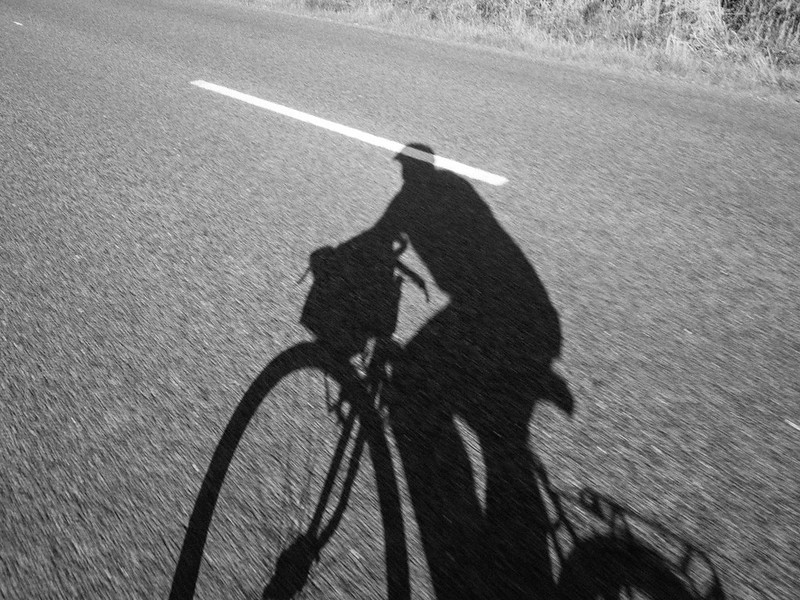 The old highway from Mangatawhiri had more traffic on, but it also had a wider shoulder. From Rawiri to Miranda the road was fairly quiet, although at least half the cars I saw were on some kind of rally. I think it was a rally for cars from the 70s & 80s that had been fitted loud exhausts and lots of stickers. I finally made it to the coast and the Shore Bird Centre about 11:30am. I spent a few minutes wandering around looking at stuffed birds (those Caspian Terns are big aren’t they?) before embarking on the return journey. 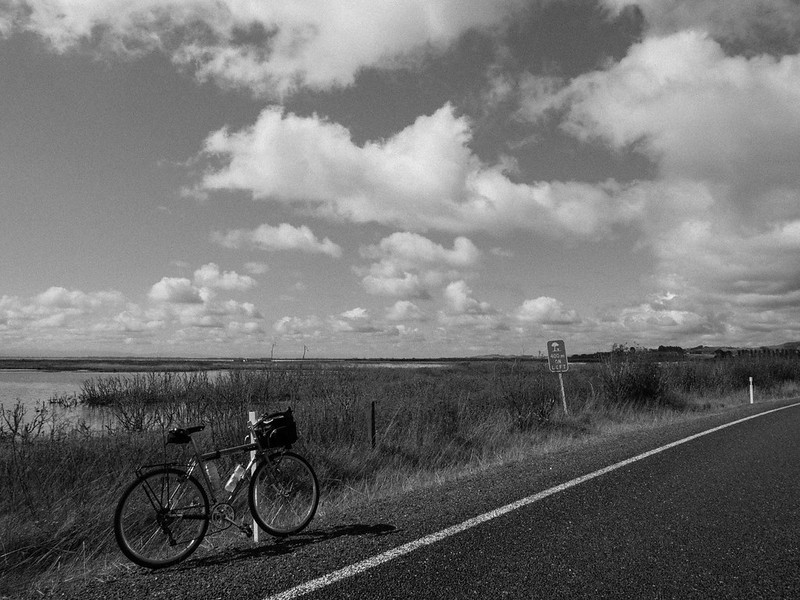 By this stage I had realised that all this had been a huge mistake. This wasn’t autumn, it was still summer and I was like a snowball in hell. Or like a person who was too hot and far from home in the midday sun. Also I was quite tired. So I pulled in to the Miranda Farm Stop for a rest and some things to eat & drink. It seemed like a good strategy would be to take the return journey in stages – ride for a bit, sit down in the shade drinking for a bit. Repeat. I discovered that schools are handy places when you’re out on the road. They have shade, shelter and drinking fountains. 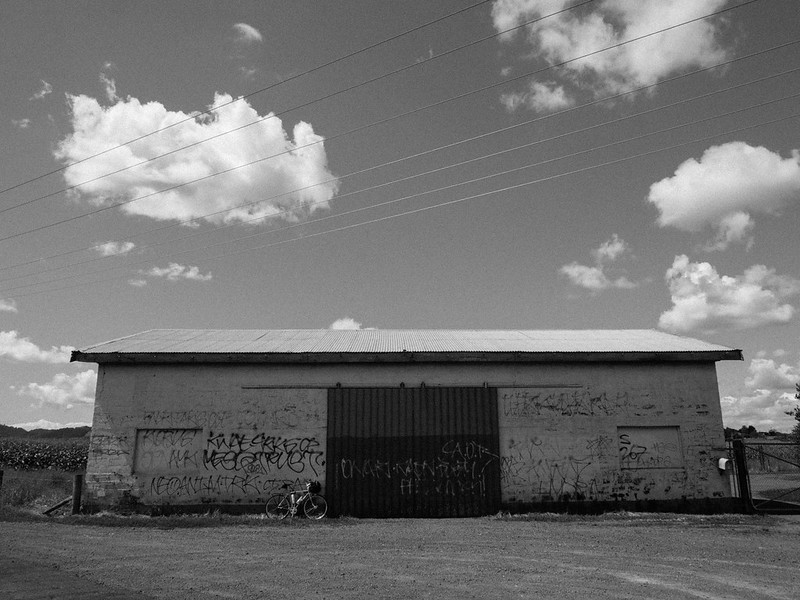 In this way I rode back to Mangatawhiri and up the Paparimu valley, all the way to the top of the Hunuas. I stopped there to drink ginger beer and talk to the woman who runs the shop, who told me that she also breeds goats. I also chatted to a woman from Kaiaua outside the shop. She corrected me when I said I had cycled out to the Miranda Shore Bird Centre – “It’s now called The Pokorokoro Miranda Shorebird Centre” she said. And so it is. She also the listed the attractions that Kaiaua has to offer the passing cyclist. A campground, dairy, garage, and a fish & chip shop. I remembered visiting that fish & chip shop about 25 years ago. The food was good, but parked outside was a ute loaded with a couple of dead and bloody wild pigs. 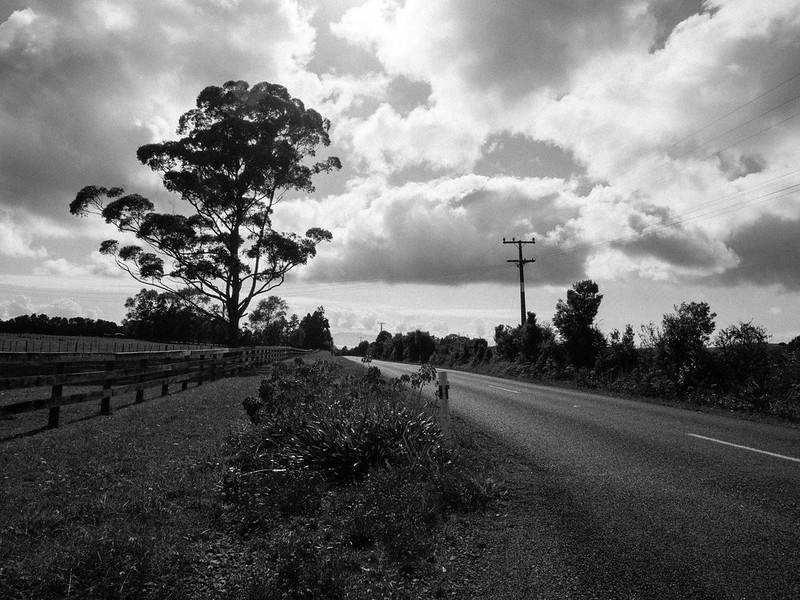 Coasting down the Papakura side of the Hunuas in the late afternoon was a pleasant relief from all the uphill, and I had a little rest at the railway station before catching the 6pm train home. On the whole, I thought the roads were ok – not too much traffic and with some nice scenery. The only unpleasant incident on the ride was when a white cabbage butterfly smacked me right in the face on the ride back. Fortunately I was wearing a proctective beard which saved me from serious injury. Imagine if it had been monarch (butterfly)!