I had an afternoon free during my recent trip to Sydney, So I decided to get out of the city and take a ride in the country. I had heard that the Royal National Park was nice, so I asked at the Clarence St Cyclery if they thought that was a good idea. The very helpful staff assured me that it was indeed a good idea, and gave me comprehensive directions. Also, somewhat endearingly, I overheard them refer to me as ‘the touring gentleman’. So I blundered around the central city looking for a railway station, eventually finding one hidden underground. Sydney trains are pretty flash, electric double-decker things. They don’t cater very well to bikes though. So I wedged myself and the Roadrat in the doorway, trying not to block it too much. After a hearty lunch of coffee and banana-bread in Sutherland I set off. The first few k’s were on a fairly busy (but generously shouldered) highway but soon I turned off in to the Royal National Park.

This was much quieter. I followed the road as it meandered steadily downwards, worrying very slightly about what it might be like riding back up. Pretty soon the road stopped meandering and started plummeting downwards. I was trying to remember the directions I had been given. “Ride through the Royal National Park to the —- Weir”. The Orderly Weir? The Otterly Weir? Aha – there it was – The Audley Weir. Now go along the Lady Something Drive.

And there it was – the beginning of the Lady Carrington Drive.

This was completely beautiful. There were no other people, just me and a Lyre bird (who I spotted sneaking across the trail in front of me).

There were also at least a billion insects producing a periodically deafening buzz from the trees.

One particular sparrow-sized insect gave me a hell of a fright when it dropped out of the sky and expired while stuck to the front of my shirt. It had a suspicious looking beak mark across its abdomen, so I think it was a present (or a warning) from one of the other birds.

Eventually (after about 10km) I reached the end of the trail and got back on a road. I was pretty sure they had told be at the shop to keep heading “right and down”. So I did.

Until I reached the coast. I followed the road along the top of the cliff, stopping for a little while to watch people hang gliding.

I stopped at Stanwell Park where the gliders came in to land.

I ate some of a muesli bar, and shared the rest with the local cockatoos.

Then I was back on the road and cycling over the fantastic Sea Cliff Bridge. I hadn’t really planned how far to go down the coast, but just past Thirroul the road started to get busier and less pleasant to cycle along.

So I gave up and caught the train from the Thirroul station back to Sydney. I can heartily recommend this route to any other “touring gentlemen” or ladies who might be in the area. It was about 45-50km of beautiful scenery, lovely wildlife and good roads – I loved it.

Temazepam is a drug prescribed for insomnia and anxiety disorders. I took some a few years ago when my fear of flying was at it’s most abject and I needed to get to Christchurch. It worked perfectly. I assumed that there would be side-effects – drowsiness or incontinence or something. But there was none of that, it was just as if the part of my brain that worried about the plane crashing had been surgically removed. These days I’ve managed to get my terror under control, but I can still do with a little help. So wandering through Sydney airport on my way back to Auckland the other day I was very pleased to be offered a shot of ‘spiced’ Wild Turkey. While not as efficient as Temazepam, it did help take the edge (of fear) off. 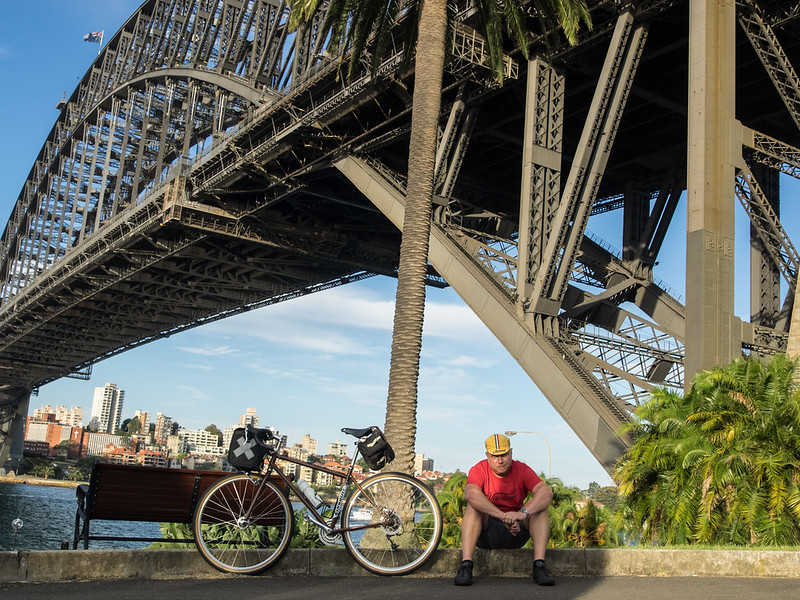 I was at least a couple of hours early for my flight, having left The Glenferrie Lodge (on Sydney’s glamorous North Shore) at about 11am with the vague plan of riding across the Sydney Harbour Bridge, along a nice cycleway to Darling Harbour, on to Cheeky Transport in Newtown and then out to the airport.

Let me start from the beginning – the Off-Roadrat and I arrived in Sydney on a Monday afternoon, I was there for a work-thing, the bike was there to provide transport and entertainment. I had travelled in Air New Zealand economy, the ‘Rat had flown (fairly) safely packed in a Ground Effect ‘Tardis‘ bike bag. After retrieving my bike from the ‘fragile and oversize items’ baggage claim, I took it to a quiet spot outside the terminal and reassembled it.

The bag is pretty minimalist – no wheels, not much padding, only just enough space for the bike. It took me about half an hour to put it back together, that is – to put the wheels, pedals, saddle, front-rack and handlebars back on. To minimise mess, I had removed all oil from the chain and waxed it. 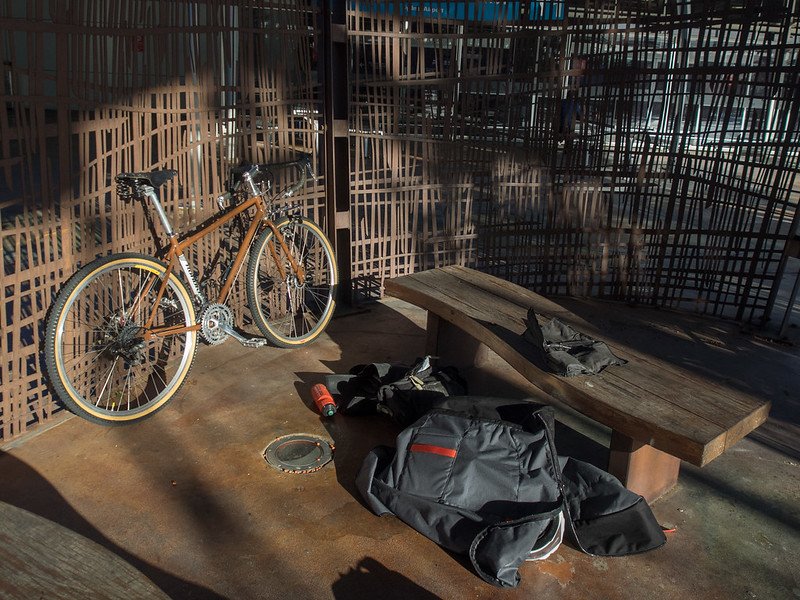 The Roadrat survived the flight ok, thanks I suspect to it’s robust chromoly steel frame. The wheels are also tough – they’re both 36 spokes on touring rims (the fat Bruce Gordon tyres probably help protect the wheels too). I used the remaining spaces in the bag to put things I didn’t want to take on the plane with me. Obviously one of the upsides to a minimalist bag, is that you can fold it up and carry it with you – which is what I did.

I had done a little bit of research to see if there was a nice route from the airport to the city. I found one, and tried to follow it (I printed out the pages and stuffed them in to the clear sleeve on top of my front bag). It was indeed quite bike friendly, with some nice separated paths and was a good introduction to Sydney.

I got lost a few times, and eventually made it to the waterfront. But then I couldn’t see how to get over to the North Shore where I was staying. So I asked a couple of locals, they told me to carry my bike up some nearby steps, ride through the Botanic Gardens, along the waterfront and then over the bridge. I couldn’t ride along the waterfront because it was closed due to some event, so I rode in circles trying to find a way to the bridge, until I eventually followed some signs that took me to the walkway that is attached to the side of it. It was super nice riding over the Sydney Harbour Bridge at night. There were people out running, and tourists taking pictures, and then a couple of German backpackers flagged me down and told me I shouldn’t be riding and that “ya it’s better for your life you know – if you get off and walk”. I said “yeah ok thanks” and then kept riding wondering what the hell they were talking about. But I later discovered they were totally right. One side of the bridge is only for cyclists and the other side is only for pedestrians and I was on the wrong one.

Over the next few days I rode to and from the office I was visiting on the North Shore. Over there the roads are mostly nice and quiet, except where they’re really busy, and I found a brilliant cycleway next to a motorway. I rode around central Sydney which was mostly ok, and I took the ferry to Manly. Which I didn’t like so much – there are lots of bikes over there, but the official attitude seems very prescriptive. There were signs that pointed me to ride on the footpath in some places, and then signs in other places threatening to prosecute me if I rode on the footpaths. The best thing about going to Manly, was that it resolved something I’d been wondering about for at least 20 years – what the hell is the lead singer of Australian Crawl, saying in that line from ‘Reckless‘? “As the Manly ferry cuts it’s way to..” Sub Gillard bee? Sad killer knee? It hit me when I was buying my ferry ticket – “circular quay”! Hurrah, finally sorted that out.

It wasn’t all city riding though – I spent one day doing a great ride outside of Sydney, which will be described in Auckland Bike Slob vs Sydney Part 2.