I woke up to grey blue light filtering through my grey & blue tent and ate some flapjack. By the time I was halfway through packing up my stuff, the Mavora Lakes sandflies had formed a cloud around me and were taking turns to attack me in squadrons (at one point I ran actually ran up to the road to get away from them). But soon I was on my (itchy) way, looking forward to a long day in the (literal) saddle. 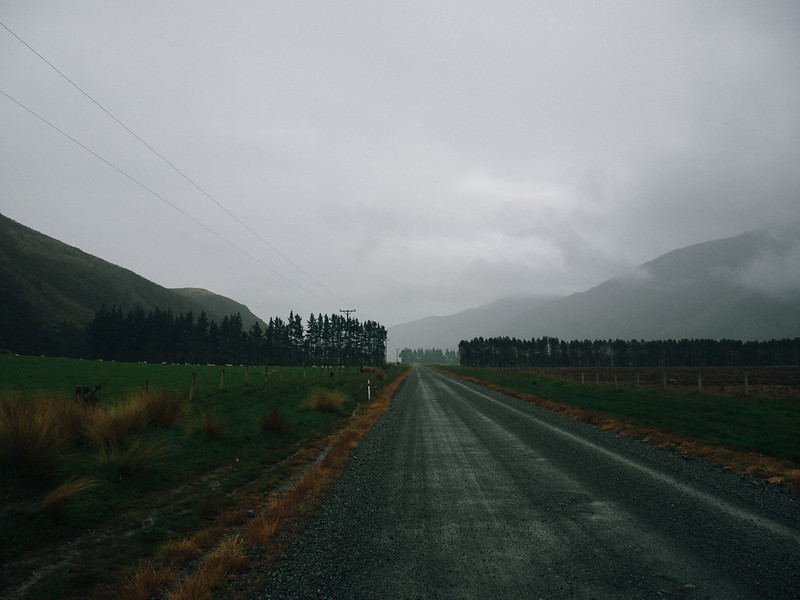 The rain began falling just after I turned south on the Mavora Lakes Road, but despite the weather I was enjoying myself – the gravel road was flat and deserted, there were fields and animals and shelter belts. There were probably mountains, but I couldn’t see them. Other than me, there were hardly people around. 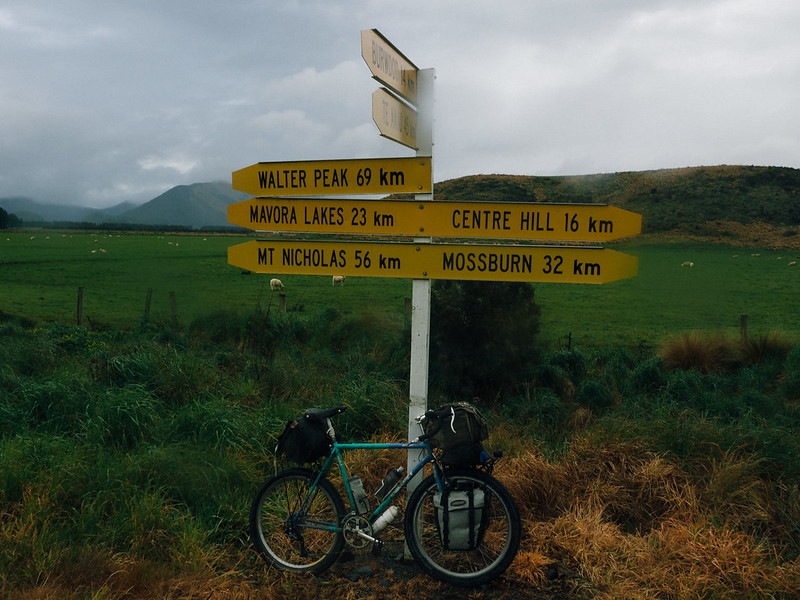 I was expecting to to have to spend some time on the Te Anau – Mossburn Highway, but just before arriving at that intersection, I saw out of the corner of my eye, a little bridge. When I rode over to it I found that it led to a cycle trail that took me all the way to Mossburn. Hooray for being able to stay off the highway. Now, let me tell you about one of the serious dangers of cycling long distances – getting a catchy song you hate stuck in your head. My personal nemesis is the Manhattan Transfer’s We Built This City on Rock and Rock and Roll. I can’t tell you how much I loathe that song, but once it’s in my brain it won’t shift. 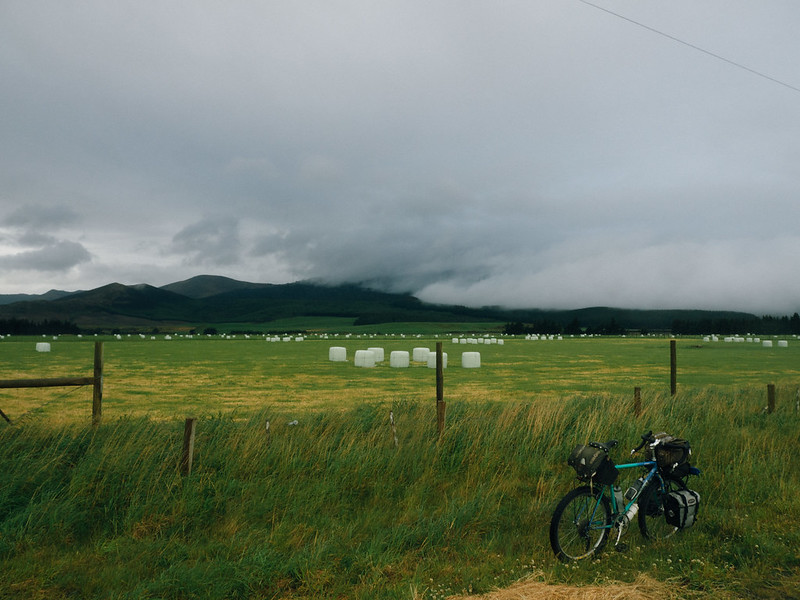 To pre-empt such a dire event and to keep myself amused, I sang other songs on my way to Mossburn, starting with The The’s This is the Day;

I don’t usually get bored on long bicycle rides, I’m happy with my own (frequently repetitive and inane) thoughts. My father used to say to me that “a civilised man can spend 3 hours at a railway station and not be bored.” (I don’t know if he thought civilised women had such capabilities, he didn’t mention them). He was certainly a good exponent of this. He always seemed only lightly tethered to the real world, ready to drift off and find amusement in his own thoughts at any time. A pause in conversation, or a red traffic light and he would be gone. Only dragged back when it was necessary for him to answer a question or resume driving. These days his connection to the physical world has (thanks to dementia) come adrift in time too. He’s happiest in the firm ground of the past, while the present is shifting sand that holds him only briefly before he slips away. 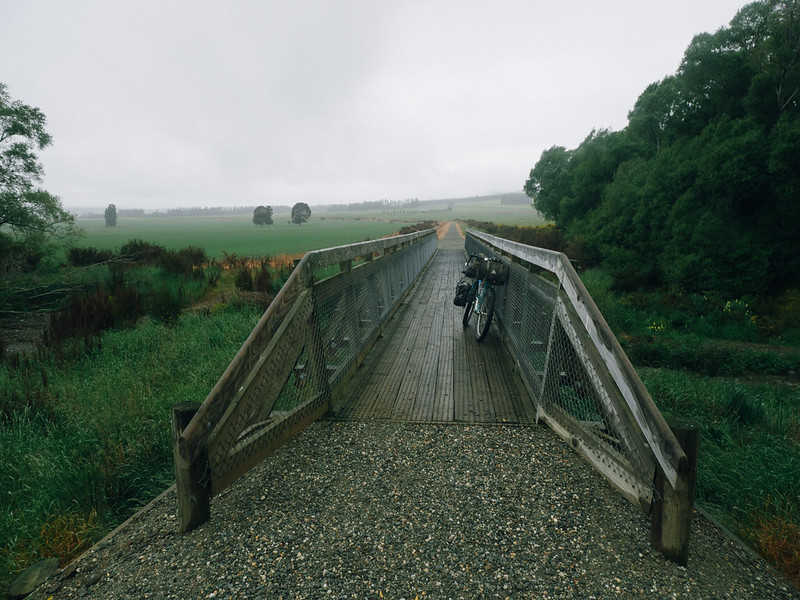 I stopped at the first place I came to in Mossburn that sold food. It was not a sophisticated establishment, but the guy working there was nice. I ate fish & chips surrounded by tacky souvenirs, watching tourists in buses coming in to buy cups of coffee. The rain was still falling and I was as wet as an otter. I left Mossburn and followed the highway to Five Rivers. The official Around the Mountains route involves going to Lumsden but I couldn’t be arsed with that this time. There’s a good sized cafe in Five Rivers so I stopped to have a look. It was fairly full, mostly, it seemed with groups of men on motorcycling holidays. They were swishing in and out, dressed in soggy protective clothing, ordering large meals and complaining about the weather. It felt too crowded so I squelched out, got back on my bike and found the next section of the cycle trail. The rain continued and and I was getting tired. Seeing some alpacas cheered me up though. They reminded me of a roller derby player whose derby name was Alpaca Punch. 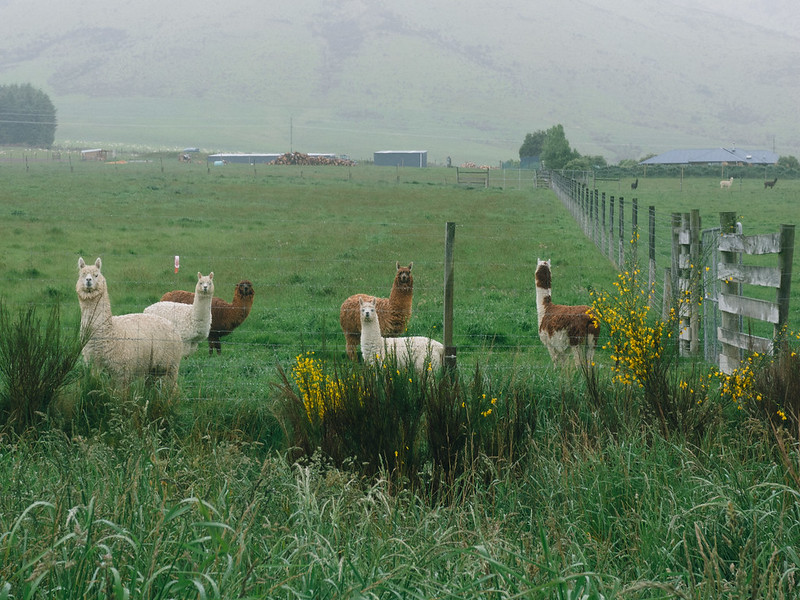 I started to see signs warning me that I was entering a working farm and that there were hazards everywhere. Then I saw an actual farmer – I waved, he opened a gate for me, I thanked him, it seemed like a friendly interaction. But the next farm along wasn’t so cordial. They had in fact put a padlock on and locked the gate across the cycle trail. Which meant that I had to remove my front panniers and then grunt & curse while lifting my bike over the gate. I put the panniers back on and continued riding while wondering what the hell that was all about. Then the same thing happened at the next gate, and the next and… Five. Five bloody gates in a row were padlocked. I don’t know why. 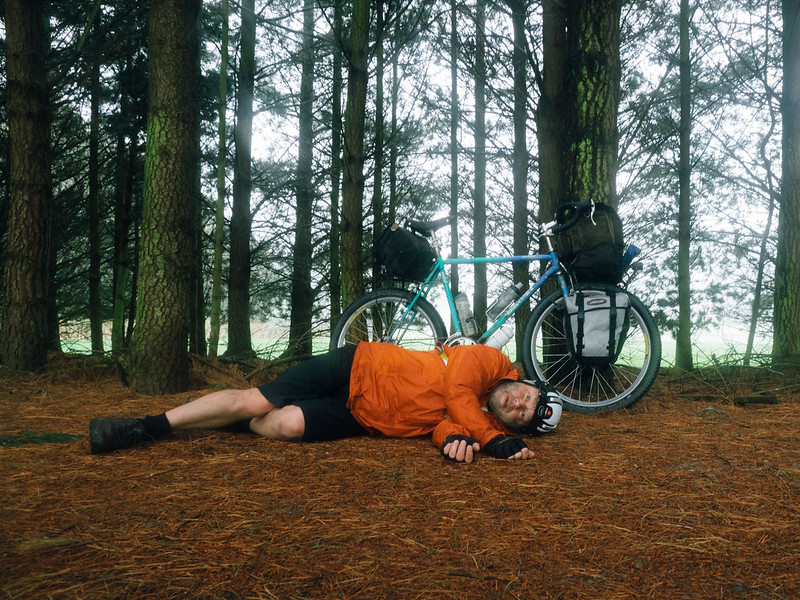 At some point in the afternoon I arrived in Athol, and dripped in to The Brown Trout Cafe. The woman who took my request for soup and toast was very nice. We talked about sandflies and she told me that her boyfriend had a serious allergy to them and has some super strong special repellant. She tried using it once on her hands and her nail polish melted. A somewhat melancholy poodle came to see me while I waited for my food. I patted her and she stayed a few minutes before wandering off to sit by the door and stare out at the rain. According to my notes, the soup was fine and it was accompanied by “the best buttered toast I’ve ever eaten”. 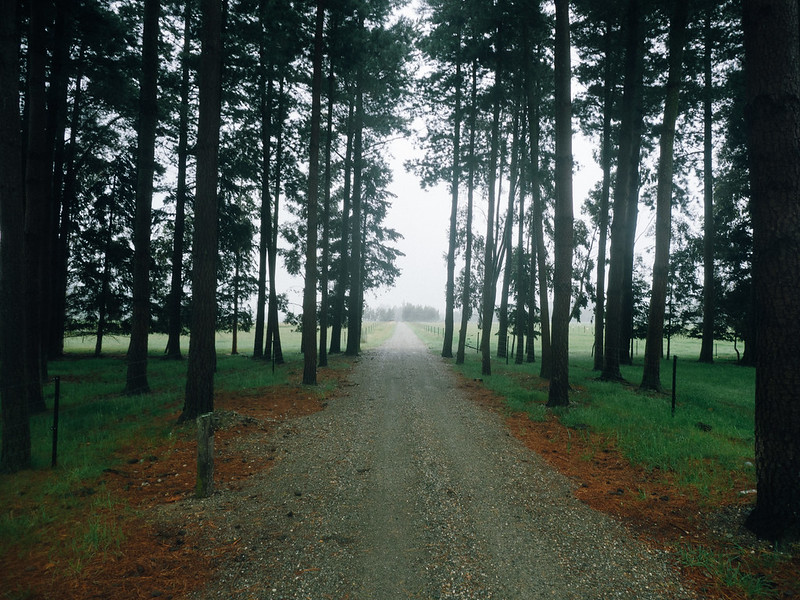 Slightly revived by food, warmth and company, I embarked on the last stretch of my ride to Kingston. The track was as deserted as ever (I didn’t see a single other cyclist all day) and the rain was still falling and I was still tired. The flat terrain was punctuated with bridges now and then and I was starting to think about what I would do when I arrived in Kingston. How will I reward myself for all this effort? A lie down? A shower? A cup of tea? All of these things at the same time? Having spent the whole day wet, I decided not to camp for the night, but to treat myself to a room or cabin of some kind. Somewhere dry. 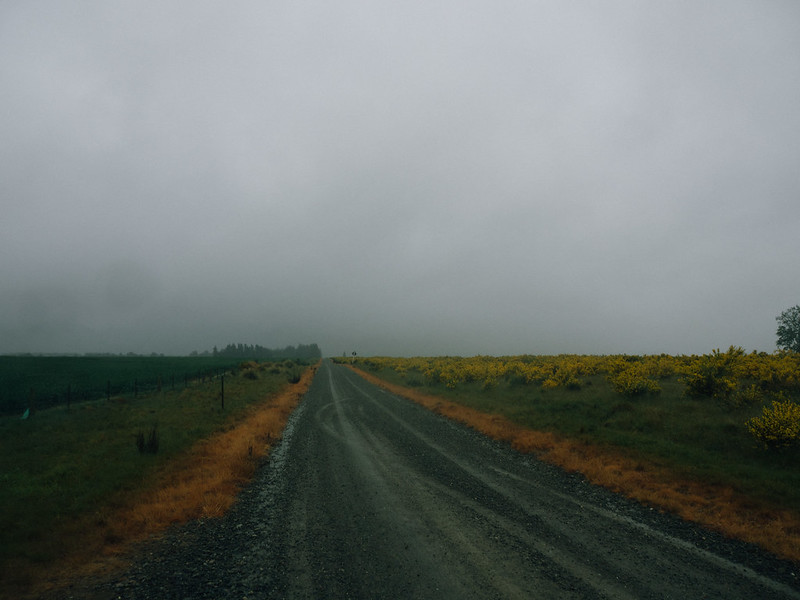 On the last 10k’s or so to Kingston, there are markers every kilometre, counting down the distance (or counting out the distance if you’re going the other way I suppose). These were perfect for feeding my fantasies about what I would do when I arrived – 5km to a warm shower. 4km to lie on a dry bed! Ah the luxury I was anticipating. It was enormously disappointing therefore, to find that they had no, I repeat no, rooms left. Not even a barn. Even Jesus had better facilities. They did kindly let me put my tent up in the barbecue area (in the pouring rain) though. So I did that, and then spent the evening drying my clothes in front of a tiny heater in the dining room that was on a timer and had to be switched back on every 20min. I fell asleep to the sound of rain on polyester, and the humming of wind in the guy lines.