Generally speaking, I like a shortcut. I enjoy the little surge of smug pleasure I get when riding along a little path between two city streets that people driving cars can’t use. Or riding down a backstreet that means I can avoid a nasty intersection or a steep hill. Like using Sarawia Street in Parnell to avoid cycling down Broadway, or that path between Sylvan Avenue East and Sylvan Avenue West in Eden Terrace. But some shortcuts turn out to be slippery slopes that begin with overconfident foolishness and end in misery. Let me tell you about one of those. 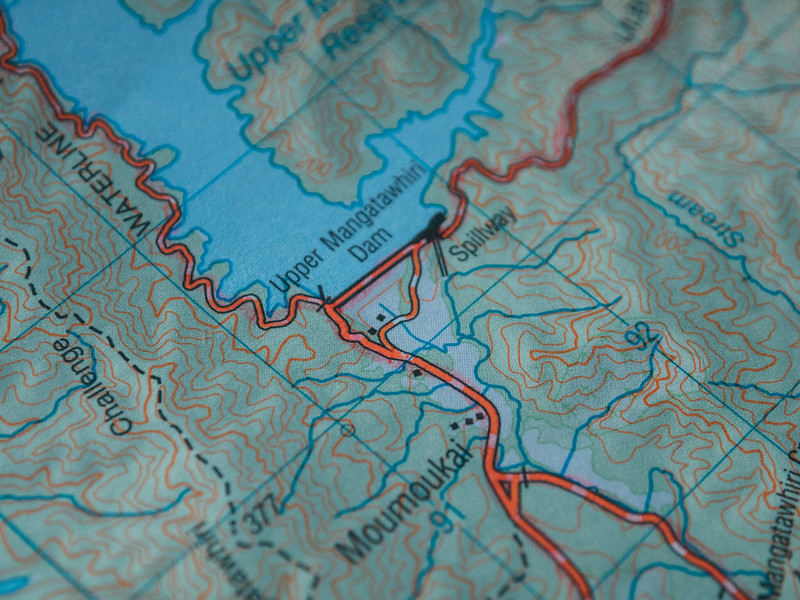 Back in November of last year, I thought it would be interesting to see if I could find a better route through the Hunuas. I had tried Hunua Rd (ok but a bit busy) and the Tour Aotearoa Route (scenic but hilly) but recently I had been in the area and made a typical navigational error, which took me some way up Ponga Rd. Which was both scenic and quiet. When I looked at a map later, it turned out that Ponga Rd joined Hunua Rd further up and looked worth exploring. So on a drizzly Saturday morning I trundled my newly resurrected old Bridgestone MB4 off the train in Papakura and set off South West. Ponga Rd was indeed a nice way to go and I was nearly at the top when I got a phone call from Guy, saying he was keen to come for a ride and would meet me at the Upper Mangatawhiri Dam. So I kept riding while he drove down with his bike in the back of his car. We duly met up and pedaled to the top of the dam and then up Lilburn Road. 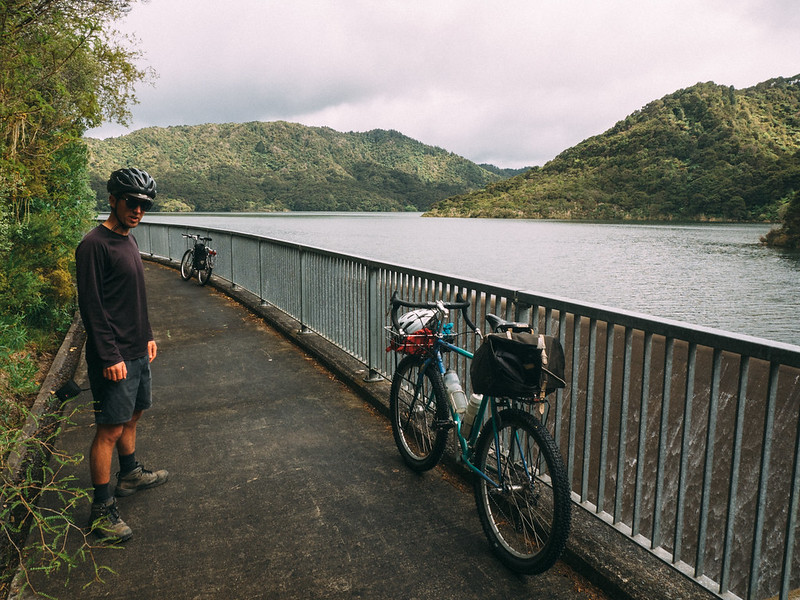 It was a nice gravel road that led up a hill along the side of the reservoir. When we got to Piggots Hut, there were some trampers having lunch. We wandered around a bit and looked inside the hut. There were a couple of bunks, a tiny christmas tree and bugger all else. The ultimate destination I had in mind when I set off in the morning was the far end of Mine Road. I had been part way down there before (walking) but I wanted to go all the way to where I hoped the ‘mine’ would be. But to get there, we would have to ride all the way back down to the dam, and then up the northern side of the reservoir. I had a look at the map painted on a sign outside the hut, and it showed a track that would take us from where we were, to Mine Rd. Aha! A shortcut! So I walked over and had a look at the entrance to the track. Unfortunately it was just a walking track and not suitable for cycling. So that was disappointing. But Guy had the same idea and he was not daunted by what was clearly just a walking track.

“Lets give it a try.” he said.
“Umm…” I replied.
“There might be a bit of pushing.” he suggested.
“Uh… Okay.” I mumbled tentatively.
“So this is a joint decision?” said Guy.
“Sure.” I replied, thinking that we might be making a huge mistake and I was just accepting half the responsibility. 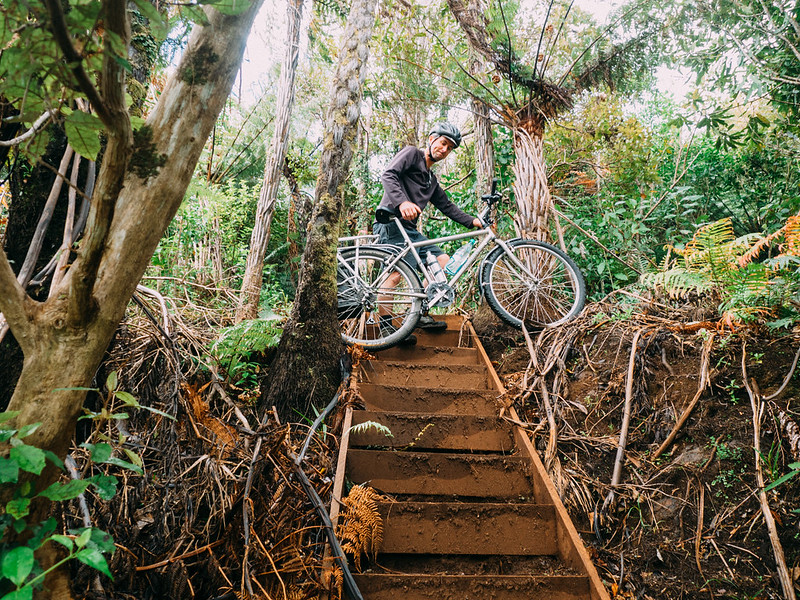 And that was it, we were off down the track and had to get off immediately and carry our bikes up some steps. At the top of the steps we could ride briefly before getting off to push for a bit. We passed the first hour or so that way – cheerfully pushing our bikes, riding occasionally and carrying them up various steps. 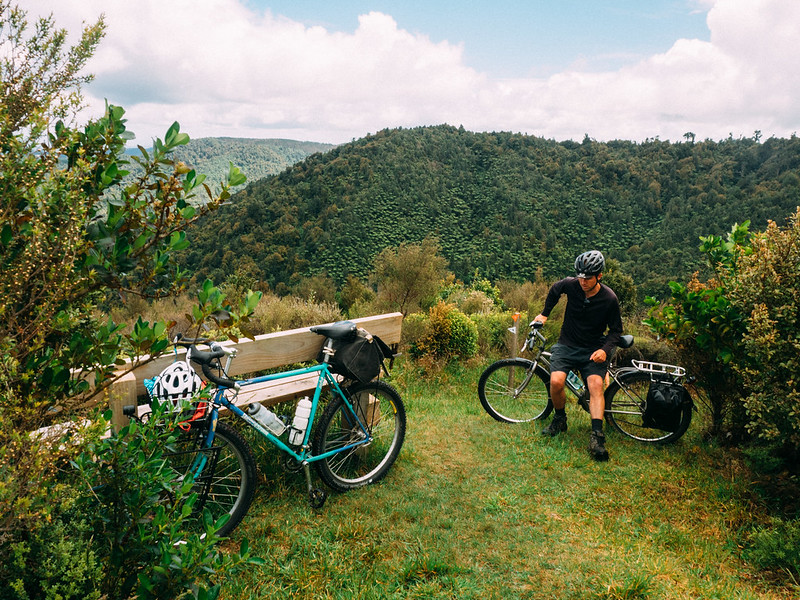 Then we came upon a seat in a small clearing at the top of a hill. It had a nice view across the reservoir so we stopped to drink some water and consult my topo map. Which gave me a somewhat different perspective to the map on the sign outside Piggots Hut. That map, it seemed, was more symbolic than accurate. My map was also (as the name would suggest) more topographic, and showed several hills on our route. I started to feel the first twinges of concern, but Guy and I said things to each other like “Well we’ve come this far” and “It’s probably not much further” and then kept going. And the path deteriorated and we were doing more carrying and less pushing and no riding. We passed some more trampers going in the opposite direction who were (understandably) surprised to see bicycles. By this time I was no longer enjoying myself and was treating this as a part of the journey that I would just have to put up with to get where we wanted to go. Then it go a lot worse. The track had pretty much disappeared and now there was just bush with triangles on trees every now & then and the hills got really steep. So steep that just walking would have been hard work, but dragging bikes along was just awful. 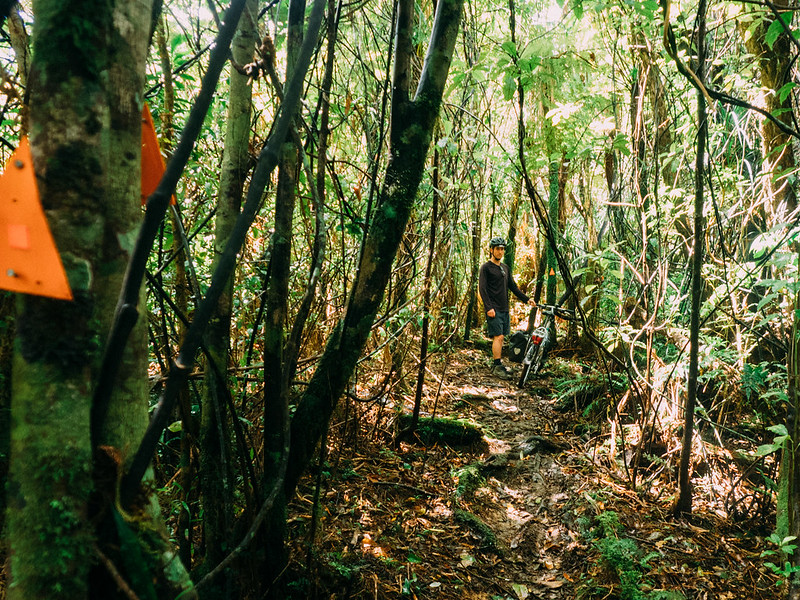 It’s something that I hadn’t really appreciated before, how your friendly and docile bicycle, your useful assistant in daily travel, changes when the terrain no longer suits it. Your bike becomes an awkward, pointy, scratchy, worse-than-deadweight that seems to be actively trying to hurt you. All the time. The pedals are constantly scraping your legs, the handlebars keep swinging around to poke you in the chest or crush your fingers. Getting a rabid cat in to a bath would be more fun. The hills were so steep going down that at times I could just lay my bike (that I now kind of hated) on it’s side and let it slide down through the dirt and leaves until it would get caught on a tree root or something, and then I’d slither down after it and try and untangle it. At one point, Guy said to me from up ahead “I think I’m getting the rhythm of this” and immediately fell over. I was too tired to laugh so I just thought sarcastic things like “Oh, and falling down is part of the rhythm?”. And so it went on for actual hours, hills, valleys, falling over, bikes scratching and biting us. It was truly horrible. 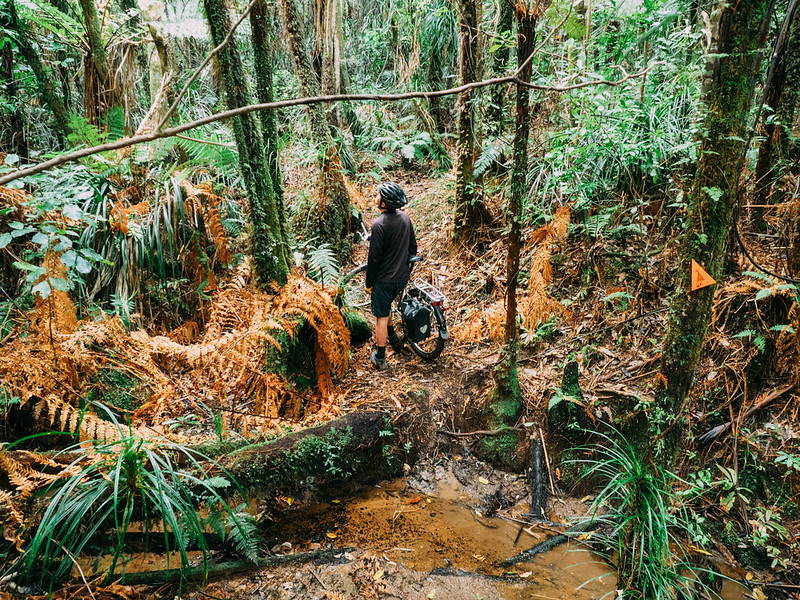 Eventually I started to worry that we would have to spend the night in the bush, or abandon our bikes. We had started ‘The Shortcut of Horror’ (as I now thought of it) at about 1pm and six hours later we were still in the bush. After a a particularly steep climb, where I had to carry my the MB4 on my shoulder & stop every few meters to rest, Guy (who was coping better than me) said he’d go on ahead and see if we were near the road. I reluctantly agreed, worrying about being left alone in the bush. He came back within 20min or so with the glorious news that it wasn’t much further ahead. With Guy carrying some of my stuff, I struggled along the last bit of “track” and emerged thankfully on to Mine Road. 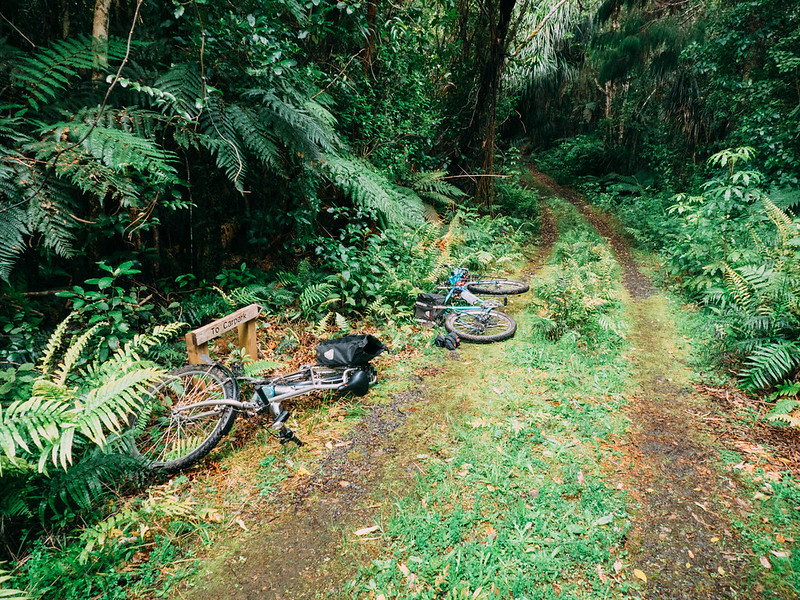 By this time it was dusk. The ‘shortcut’ had taken us seven and a half hours to traverse (I checked later and the distance we had covered in that time was about 7km). We still had 10km left to ride, to get back to where Guy’s car was parked and I expected this to be really hard after our ordeal in the bush. But the gravel roads transformed our bikes back in to efficient vehicles, carrying us quickly and pleasantly along through the gathering dark. We had such a great ride that it almost overtook the certainty that this had been The Worst Ride Ever. 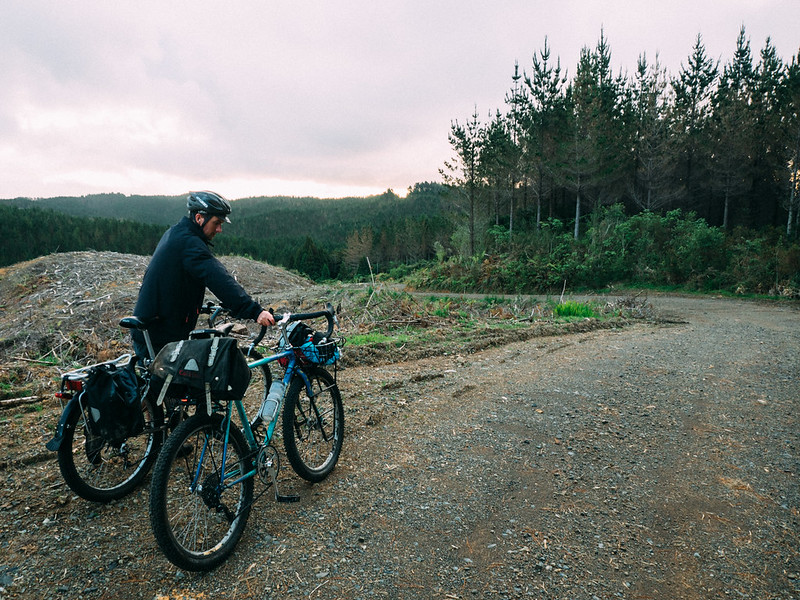