Some time ago, I started a bicycle club. It was an offshoot from Tumeke Cycle Space, an opportunity I thought, for us volunteers to get together and go for some rides. Either around Auckland or further afield. So far the club has no rules, no official positions, no logo and no regular meetings. What generally happens is that someone has an idea for a ride, they talk to some others via a Loomio group or in person. And then those who want to go, go. It was Alex R’s idea to go for a camping overnight in August. I suggested taking the train to Papakura and then cycling down to Miranda, staying at the campground and riding back the next day. Others said they were keen. Then an astute member pointed out that they were no trains going to Papakura that weekend. Let’s ride all the way(!) I suggested. Thinking quietly to myself that 100km each way might be quite hard. Alex R and Josca both expressed their enthusiasm and we met in Onehunga on Saturday morning, ready to go. 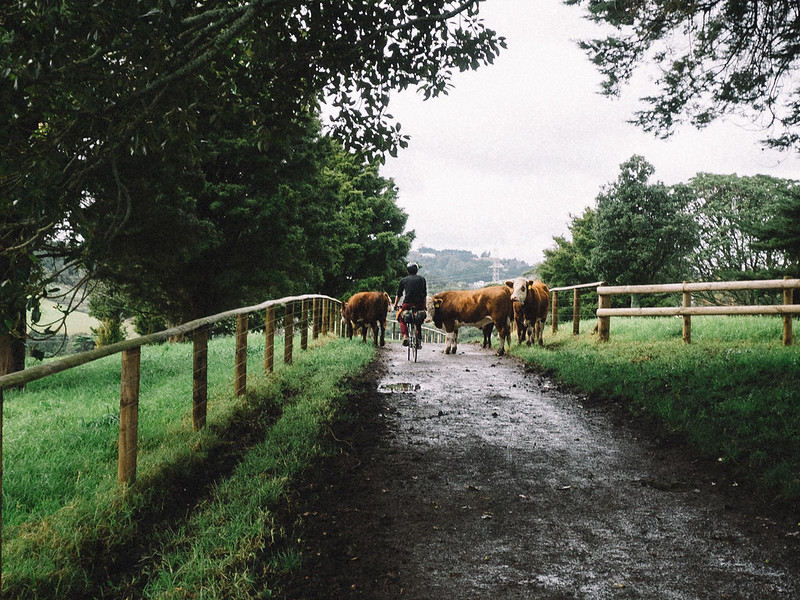 I didn’t know what would be the best route to the Hunuas, so I copied the one taken by riders in the Tour Aotearoa. This passes through Onehunga, past the airport, down Puhunui Rd, up a hill in Pakuranga and through Totara Park. I wasn’t familiar with Totara park at all, but actually, it’s pretty nice. We did have a little incident when we came upon a dog running about, barking at some some cows. So I leaned over the fence and yelled really loudly and angrily at it to “GETOUTATTHERE”. And the dog ran away. 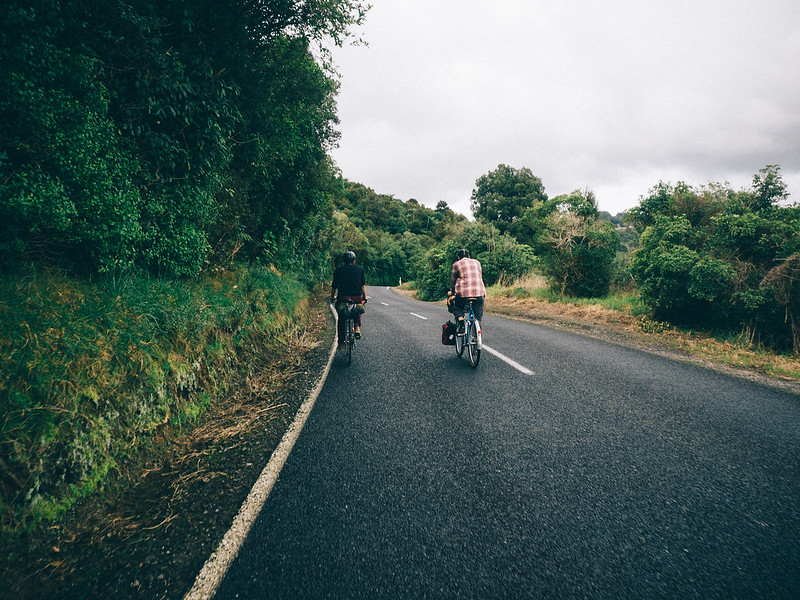 Soon after that we started to leave suburbia behind and roll in to ‘The Country’. This part of ‘The Country’ has quite a lot of traffic in it though, and it wasn’t until we turned off the Papakura-Clevedon Road and on to Ardmore Quarry Rd that things quietened down. There were no cars, lovely scenery, creepy abandoned houses in the bush – now this was more like it. There were also some steep hills and a bit of getting lost, before arriving in Hunua, where Josca purchased a cup of coffee. 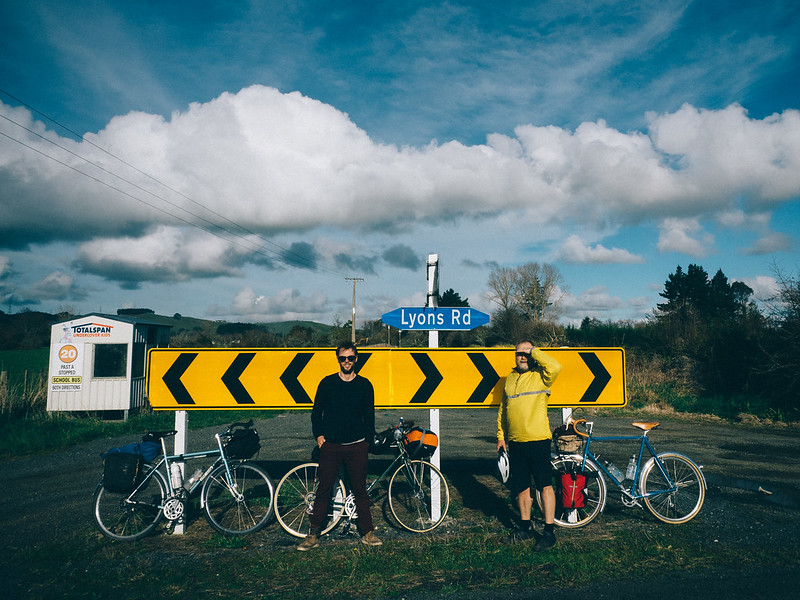 From there we rode down the Paparimu Valley and out to the coast, pausing fairly briefly to fix a puncture on Josca’s rear tyre while Alex disappeared off in to the distance. Alex was in more of a hurry to get to our destination, mostly I think due to his unwise decision to use this trip to ‘break in’ a new Brooks saddle. When we caught up with him a few kms from the campground, he complained about us being slow so I told him about Josca’s puncture and tried to make him feel bad for not coming back to see if we were ok. 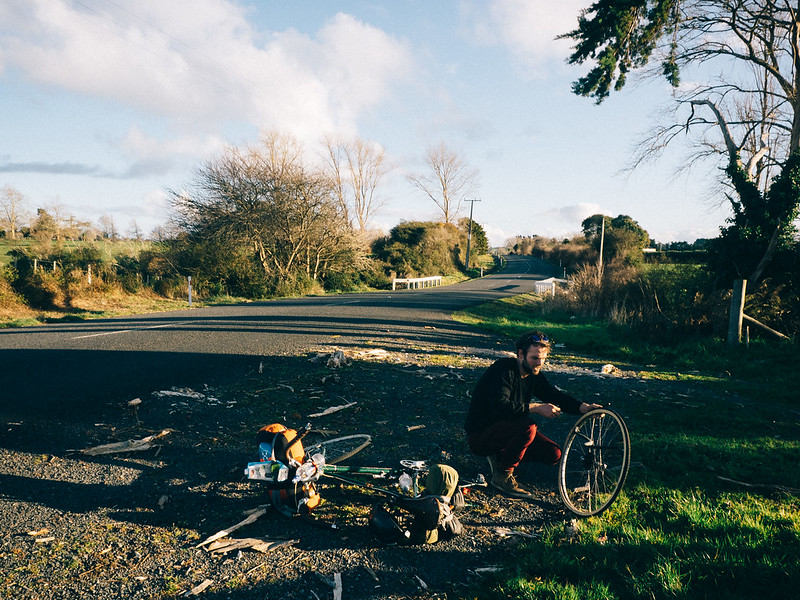 The campground in Miranda was nice, although quite big and busy. There were lots of campervans, and buses full of a children’s softball team (we got to know them a little better later on when they stole our table in the kitchen and their parents had a really loud birthday party). On the up side, you could buy beer from the camp office and children aren’t allowed in the hot pool after 8pm. The hot pool by the way, is really nice, particularly after a long day on a bicycle. Josca, Alex and I floated around for quite some time talking a lot of boring shit about bikes for an hour or two before retiring to our respective tents. 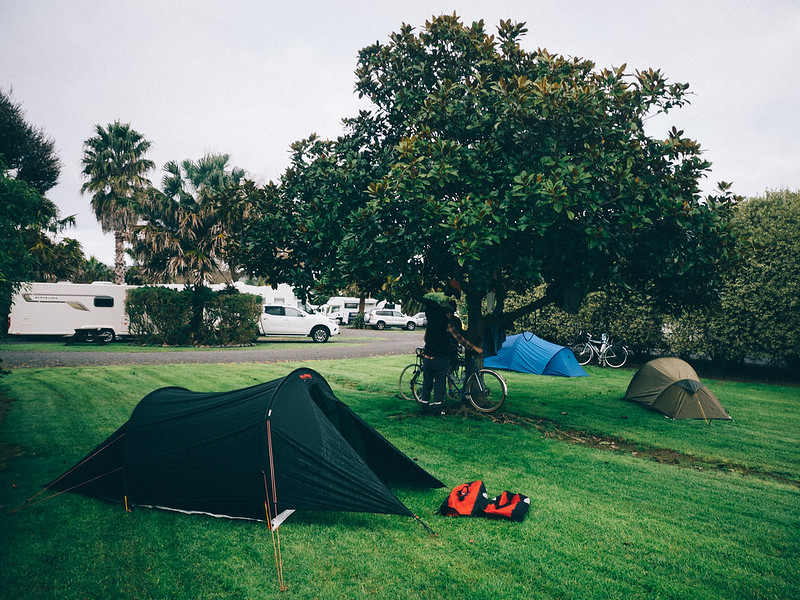 The next morning we scoffed a First Breakfast in the campground kitchen, before heading back to Auckland. We paused for a little while on the way at the Miranda Farm Stop, where we had Second Breakfast (tea & scones) and again at the garage opposite that weird, tacky (and now closed) ice-cream place that looks a bit like a castle. We were a bit slower, and a bit more chatty riding back. The weather was pleasant and the road was quiet all the way up to Hunua, where we stopped for more food (a nice cheese & onion pastie for me). It was even quieter through the back roads down to Ardmore, the only significant event being Josca getting another puncture. 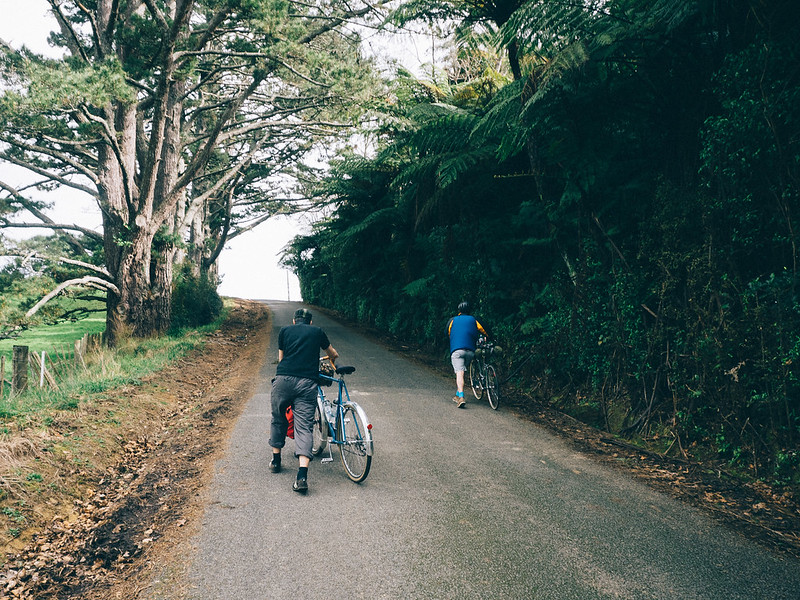 From Ardmore to Pakuranga wasn’t very pleasant – too much traffic going too fast. Alex & Josca were ahead of me as we entered Totara Park and they went the wrong way. So while I retraced our route through the lovely park, taking a little detour to the top of the hill, they were climbing fences and struggling across fields. I met up with them again at the park gate and didn’t gloat at all. The stretch from Pakuranga, past the airport to Onehunga felt like a slog, and as we rode up the hill through the Onehunga Mall, Alex said goodbye and turned left to make his way home. Then Josca turned off too, while I continued up to Cornwall Park & back to my house. 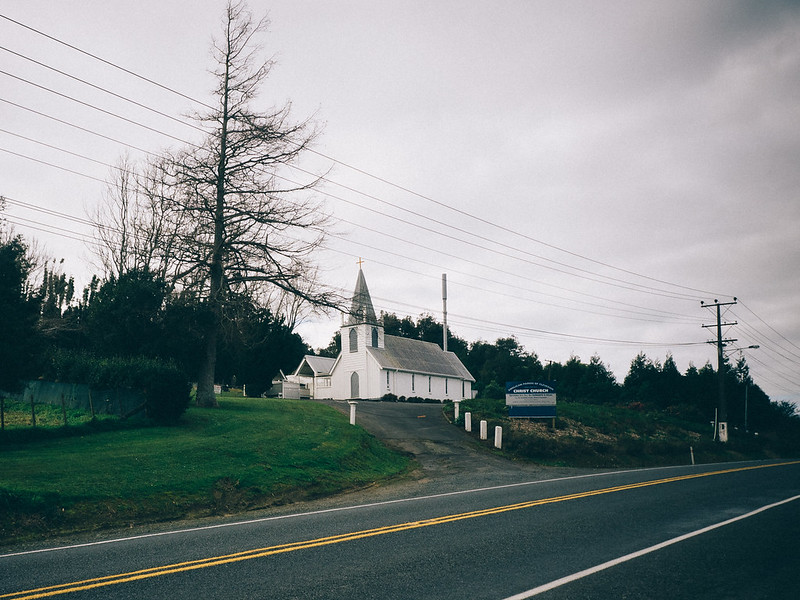 2 thoughts on “Bike Camping in Miranda”