Come with me now, on a journey through time and space. Or more specifically, a super-fantastic ride through a beautiful part of Auckland. For the full experience, make your way (preferably by bike) to Hugo Johnston Drive in Penrose. Being a predominantly industrial area, the traffic is pretty gruesome during the week, but it’s fairly quiet evenings and weekends. If you want to travel there in a stylish new electric vehicle – the nearest railway station is Penrose. You could also ride there via Cornwall Park (as I usually do). 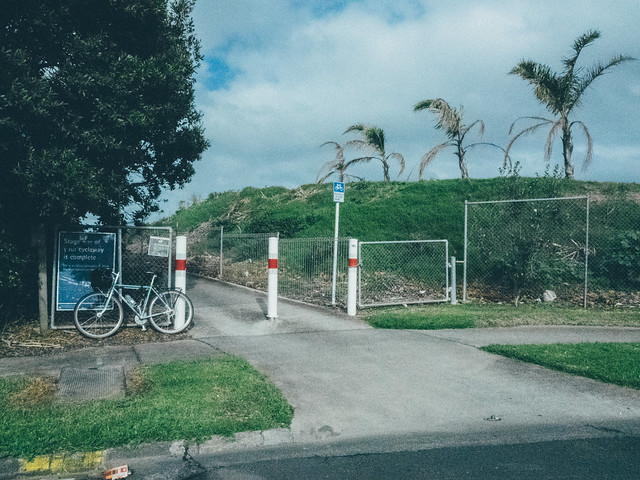 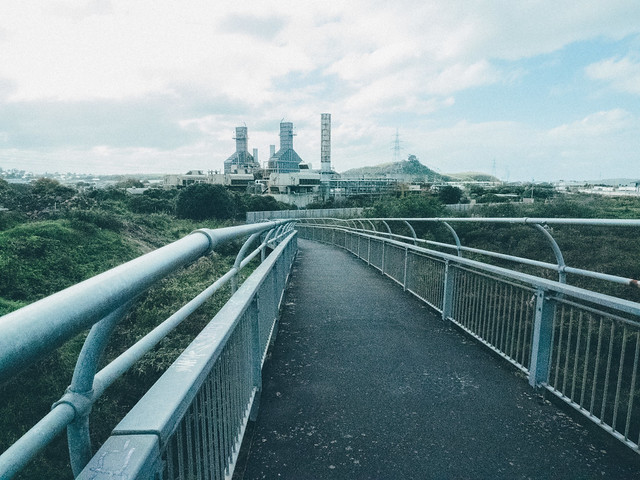 Welcome to the Waikaraka Cycleway – let it be your guide to the wonders of the Mangere waterfront. Sights like… 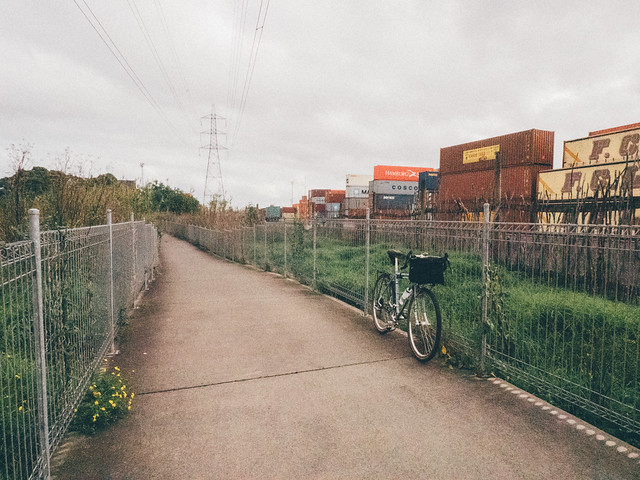 One of the Ports of Auckland’s other container storage facilities. 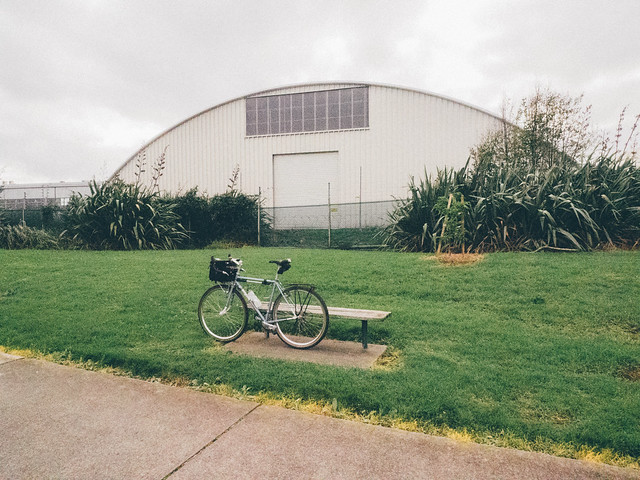 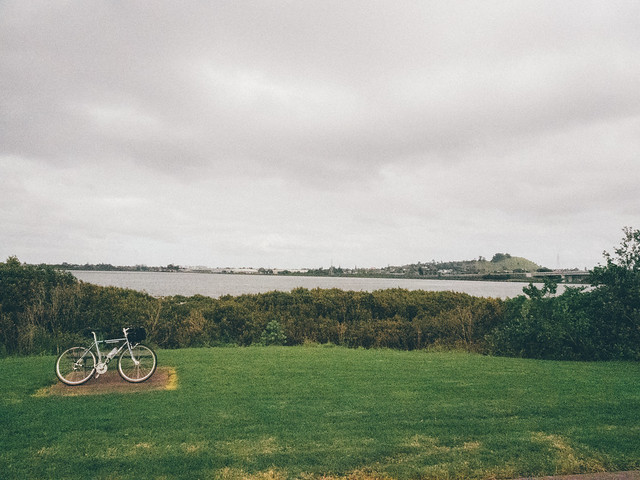 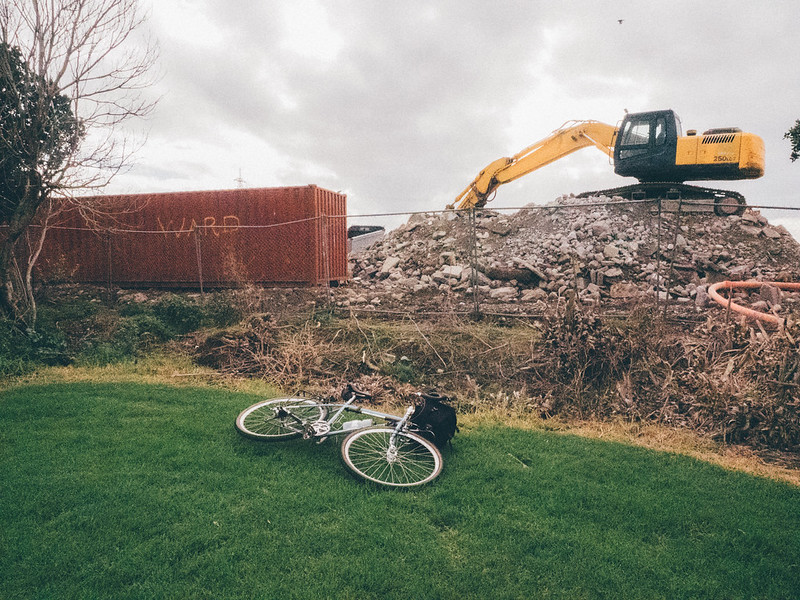 Did you ever wonder what happened to all the beautiful historic buildings that were knocked down during the 1980s Ugly Glass Tower Building Boom? Well here they are being carefully stored for future archaeologists to sift through and wonder what the fuck people were thinking. 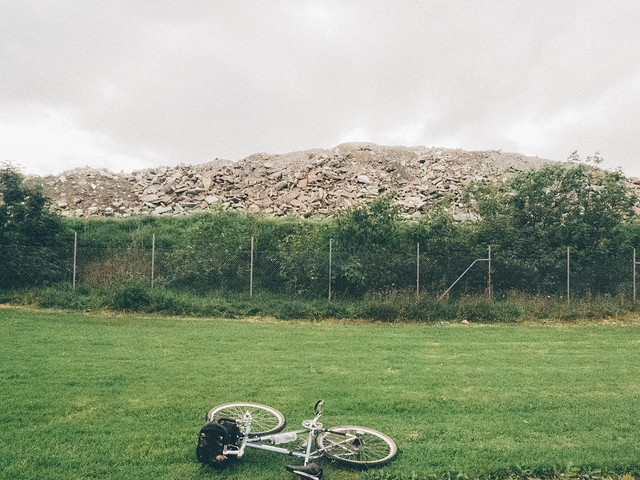 I think this used to be His Majesty’s Theatre. 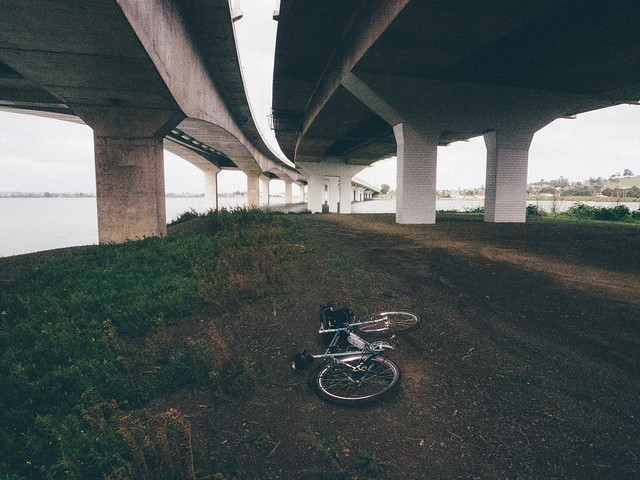 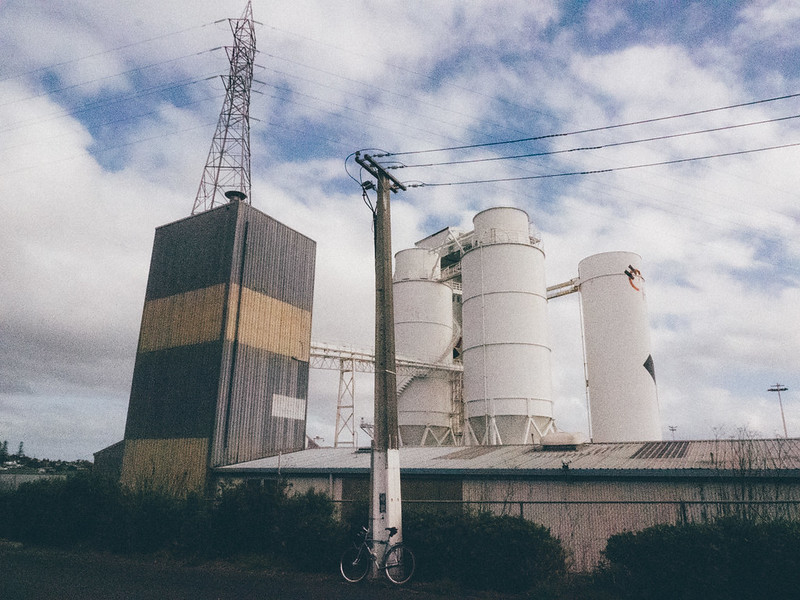 After you ride under the New Mangere Bridge, hang a left and ride over the Old Mangere Bridge. This is a very popular fishing spot, and apparently seals are seen here occasionally (when they are released from their contractual obligations to promote Papakura car washes). Over the bridge, turn right on to Kiwi Esplanade. This is a pleasant road that follows the waterfront, and will take you all the way Ambury Park. If you ride along there on a Saturday or Sunday morning you may be lucky enough to see flocks of brightly coloured roadies. At the end of the road, go through the gate and follow the gravel. 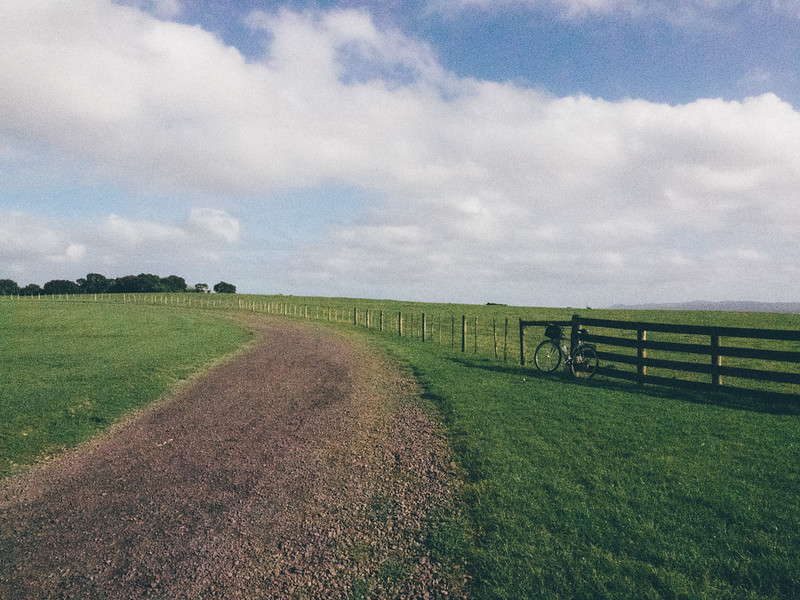 In Ambury park you will find pukekos, sheep, Clydesdale horses, chickens, rabbits (both wild and domesticated) and small children (both wild and domesticated). After pausing here to admire the forbearance of the animals, you can go through the two gates, turn left and ride south to explore the coastal wonderland (that will start to smell like poo after a kilometre or so). 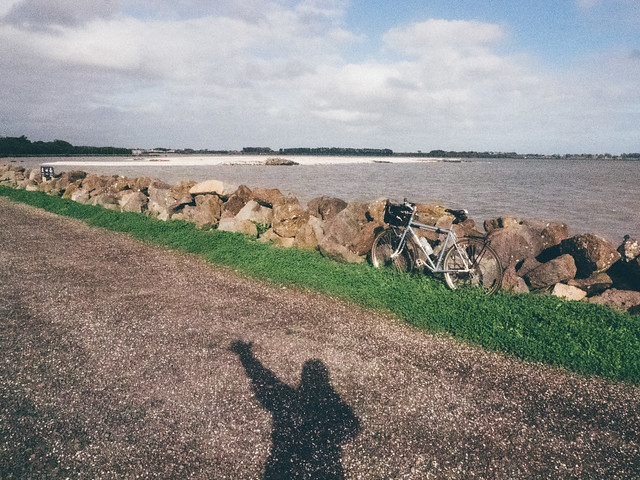 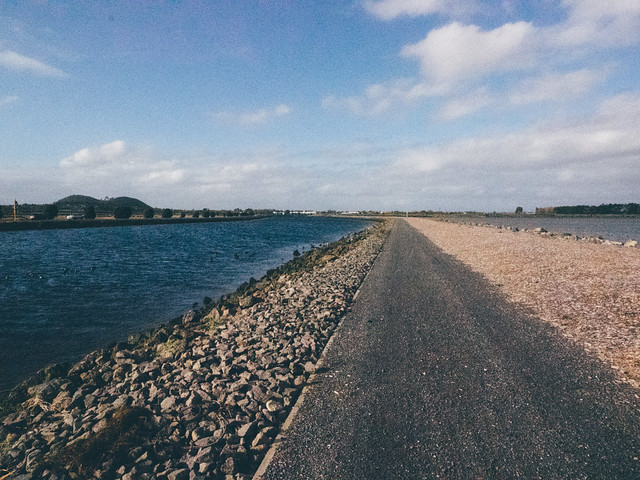 There is also a track that goes around to Oruarangi Rd and the carpark next to the wharf. Be aware that these tracks are shared with people walking, so be nice to any you come across. Once I was trapped giving way to a large group or tired & sweaty teenagers who kept asking me if “the bus” was nearby. I told them it was just around the corner. And it may well have been. 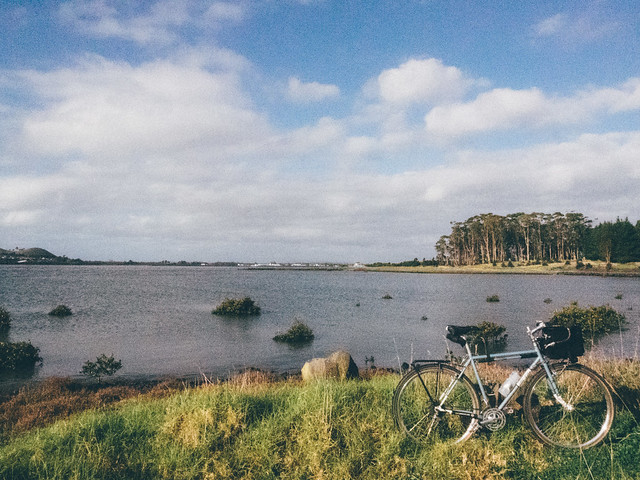 I usually ride to the Oruarangi Rd wharf and then along a track leading through the Otuataua Stonefields. 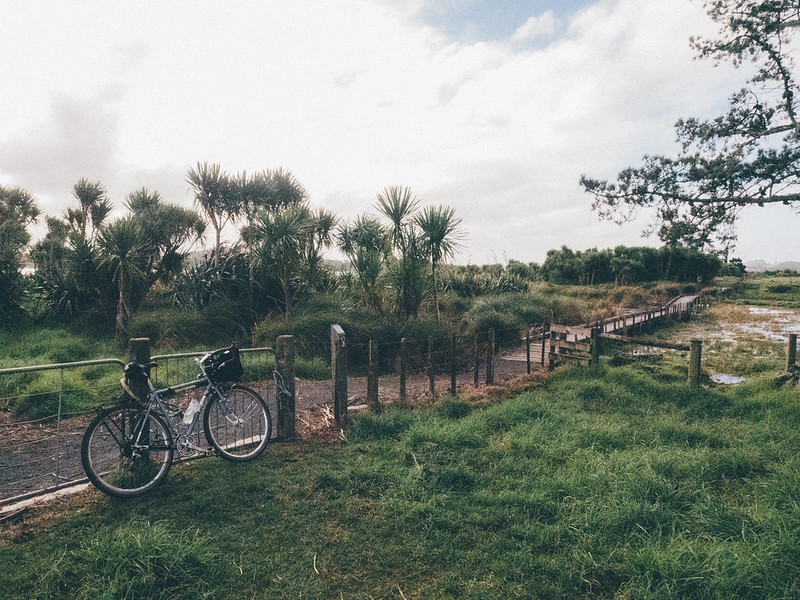 From there I cut across a field (where there are sometimes actual cows) to meet up with the end of Ihumatao Quarry Road, and then back to Mangere on sealed roads. 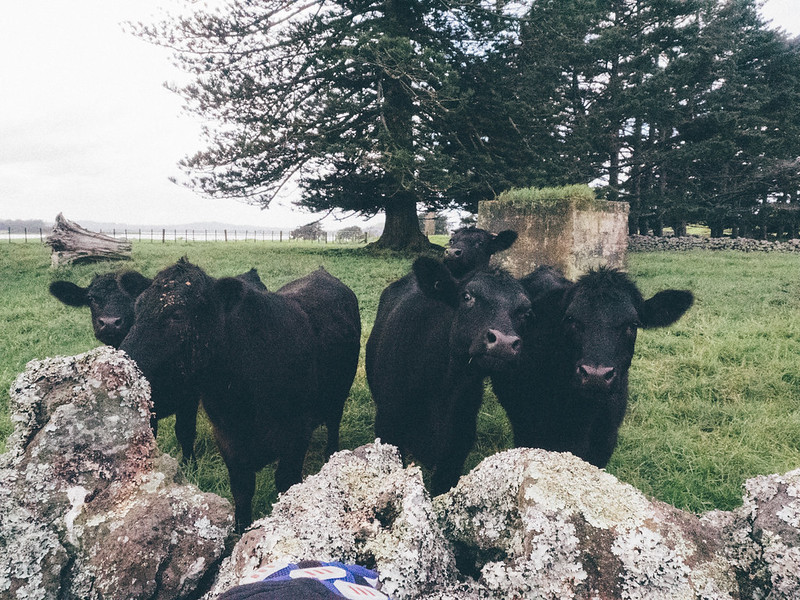 I’m honestly a little reluctant to share this ride, I’m afraid that if too many people use it then I won’t be able to enjoy my selfish solitude. But recently I’ve seen a (ludicrous) proposal to stick a motorway through the Mangere waterfront, and there’s a plan to put 500 townhouses at Ihumatao. So maybe we should all just go and enjoy the place now, before it’s all ruined. 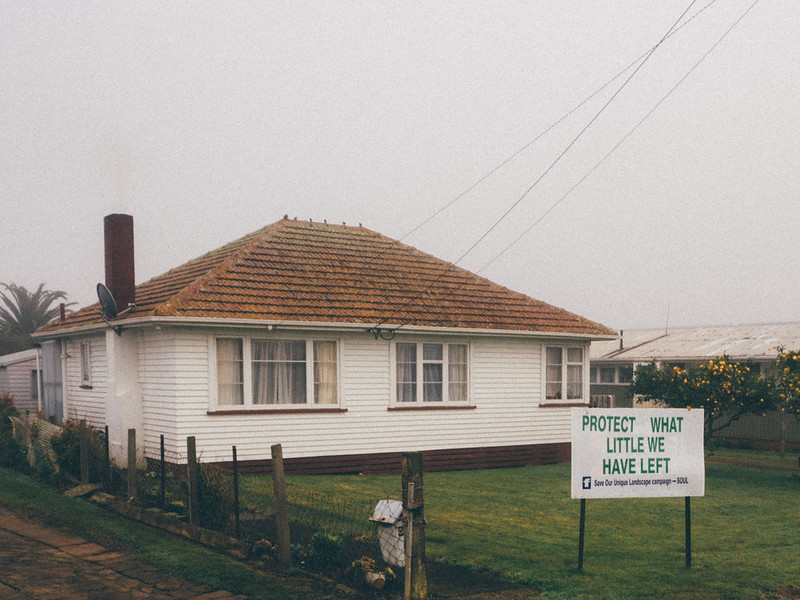 Route here that will take you on a loop starting & finishing in Newmarket.

“It is a truth universally acknowledged, that a man in possession of a good touring bike and a set of panniers, must be in want of a tour.” to paraphrase Jane Austen. 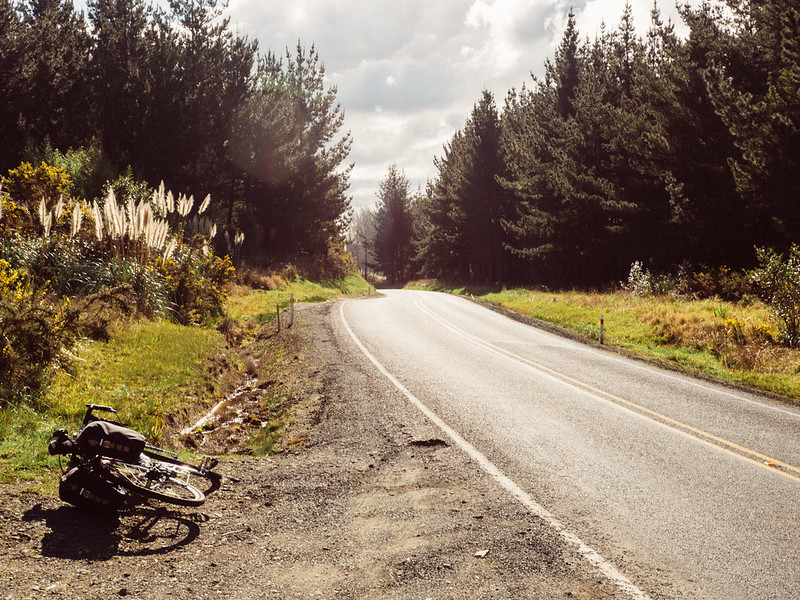 I don’t have much cycle touring experience. I’ve done a couple of overnight trips one 3 day tour, and I’m planning to do a 5 day ride soon. On all my rides to date, I had stayed in bricks & mortar accommodation. So I though it was time to try camping – it would save me some money, and give me more freedom to perhaps camp in other places should the need arise (like it did back in Omakau in February). It would also mean carrying more stuff.

I looked at various destinations around Auckland and chose Helensville. It’s only about 50km each way and there’s a camp ground (and a hot pool) in nearby Parakai. I was also somewhat familiar with the area having ridden the NW cycleway at least a million times, and out to Woodhill twice. The route was easy to plan, just ride all the way down the previously mentioned cycleway, through Swanson and then other people on The Internet had recommended taking the Old North Rd as a quieter alternative to highway 16.

When it came to packing the Space Horse on Sunday morning I was a little surprised to discover that my old sleeping bag weighed a thousand tonnes and took up an entire pannier. Must be the old-school insulation it contains (a mixture of mammoth hair and dodo feathers I believe). This excess weight was offset a little by my choice of svelte shelter – a Hennessey Hammock. Now I’d never actually slept in the hammock (despite owning it for a couple of years) so that was going to be interesting too. 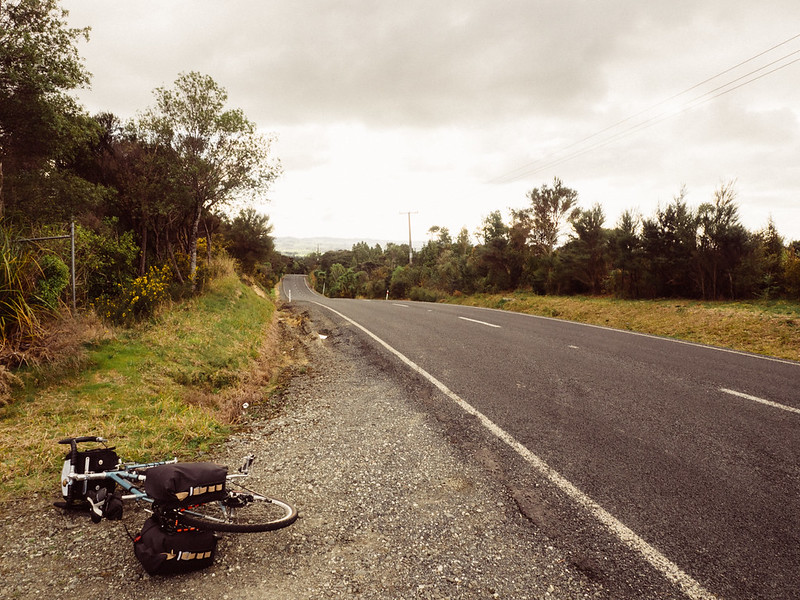 The ride out to Swanson was nice, it was a beautiful Sunday afternoon and the cycleway was looking different to the last time I rode it. I must ride out there about once every 3 weeks or so, and each time it changes. Sometimes it’s a new bridge, sometimes there’s a moved fence, other times a vast concrete flyover rising out of a swamp and across the sky, stopping abruptly in a tangle of steel rods hanging there like arteries in a severed limb.

Triangle Rd seemed to take forever to traverse and it was a relief to finally get “out in the country” in Taupaki. The roads and the scenery on the way to Helensville were nice enough, but there was too much traffic for me. Like I didn’t have the road to myself for more than 30 seconds at a stretch. I coasted down the last hill and then along a short stretch of highway to Parakai, in the middle of the afternoon. 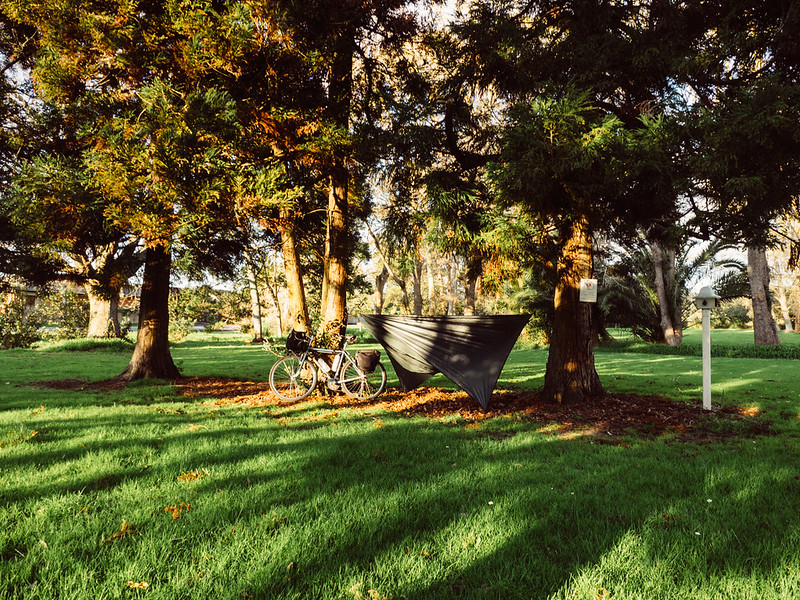 I was the only one camping at the campground but there were a bunch of caravans, some of which looked pretty permanent. There were also quite a lot of cats around. I set up the hammock (all wrong). Then I set it up again (a bit better). Before darkness fell, I rode down to the (very friendly) Grand Hotel for a drink and after it got dark, I had a (very nice) dinner at The Curry Leaf restaurant. Full of food & drink I cycled back to Parakai and my hammock. Which turned out to be quite comfortable, except that getting in to a sleeping bag in a hammock is actually really hard. And don’t even ask about getting up in the middle of the night to pee. 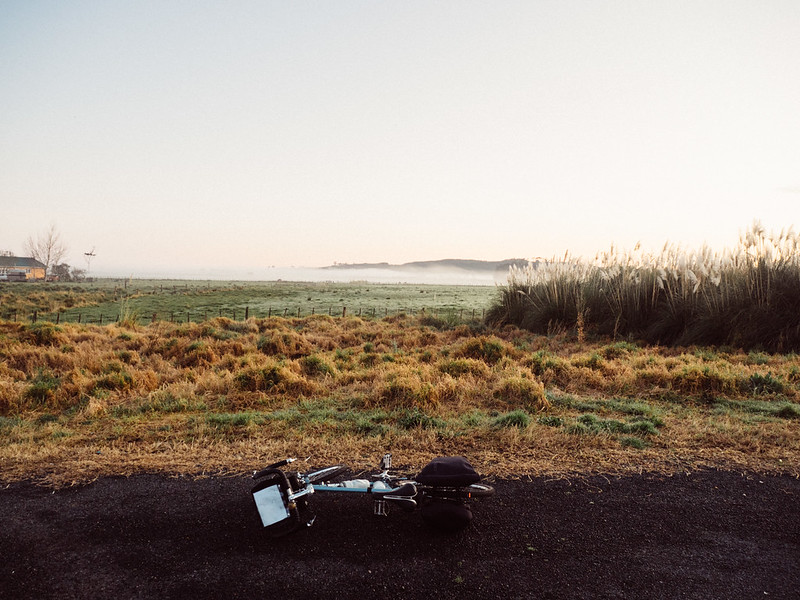 When I woke up on Monday morning, I was surprised at how much traffic noise there was, but the mist over the estuary was quite beautiful, and I had a nice chat to a guy who was smoking a cigarette in between mowing lawns. 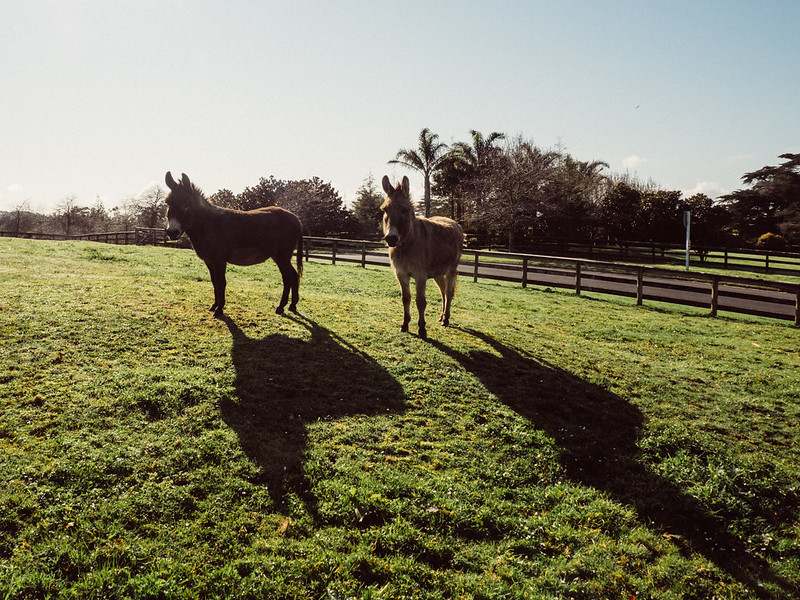 Riding back to Auckland was very much like the ride out there, but with more donkeys.