I had some fascinating yet secret business to conduct on Waiheke Island the other day and I thought it would be nice to go for a ride down to Stoney Batter while I was over there. I used to live on Waiheke years ago, and I had walked the road to Stoney Batter once. I remembered it being a long walk on a hot day. Back in those days, if you wanted to go there you pretty much had to walk it, because the local land owner had dumped a huge mound of earth in the middle of the road to stop people driving down it. The mound remained there for a few years making lots of other Waiheke residents quite angry, until a pitchfork-wielding mob bulldozed it away. Or the local council did, I can’t remember which. 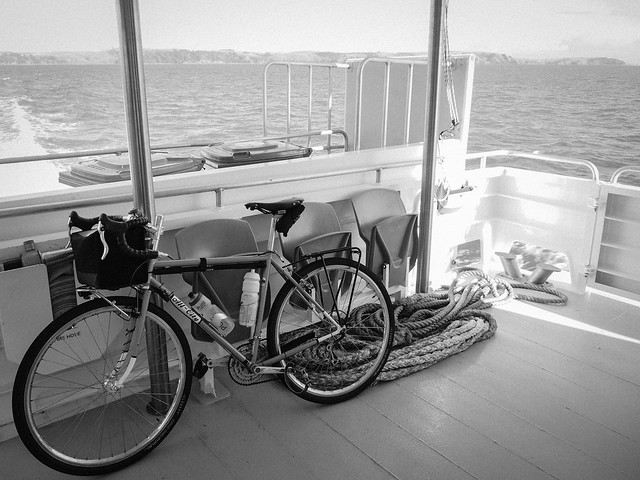 The ferry trip over was nice, and so was the ride down to Onetangi. The hill up behind Onetangi seemed like hard work, so I stopped at the top to have a drink and eat the extraordinarily expensive vegetable pie I had purchased from a cafe in Oneroa. The view was lovely from up there and it reminded me of time spent lying in the grass and talking to friends up here, back when I lived nearby. 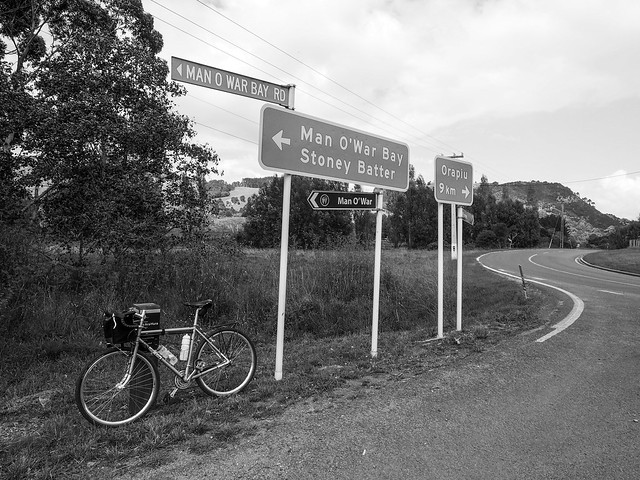 My new bike is an All-City Space Horse frame, built up with various components, some of which I transferred from the Off-Roadrat, and some purchased specially. Why a new bike? Because I want to do more touring, and although the Off-Roadrat had done a fine job carrying me to some out of the way places, it wasn’t quite right. Mostly, it was the wrong size. A little too long in the top tube, which made the handlebars too far away, even with a really short stem. It was also not really stiff enough to carry much of a load. The steel which was pleasantly springy unladen, became a bit wobbly with a few bags on (especially the front). I was sold on the Space Horse when I saw this one. It could take fat tyres and a front load – awesome. I found a frame at Human Powered Cycles in Melbourne, bought it over the phone, and my friend Steve happened to be visiting NZ and was kind enough to bring it over with him. After finishing building it up, I’d done a few rides around town, but this was my first real outing and I wanted to see if I had everything set up properly. 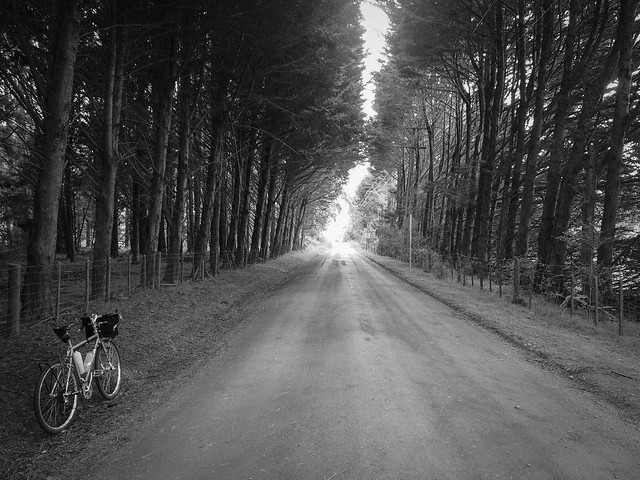 From the top of the hill, the route wound mostly down before turning left on to Man O’War Bay Road. The first few kilometers of this gravel road were untiringly flat, but then the hills started, and then continued all the rest of the way. Friends of mine had warned me about the chronic washboarding on the road – they were right, it’s pretty bad at times. I had to stop about halfway there, to adjust the front derailleur so that it would shift the chain to the inner ring. Somehow I had failed to check that when I put it on. 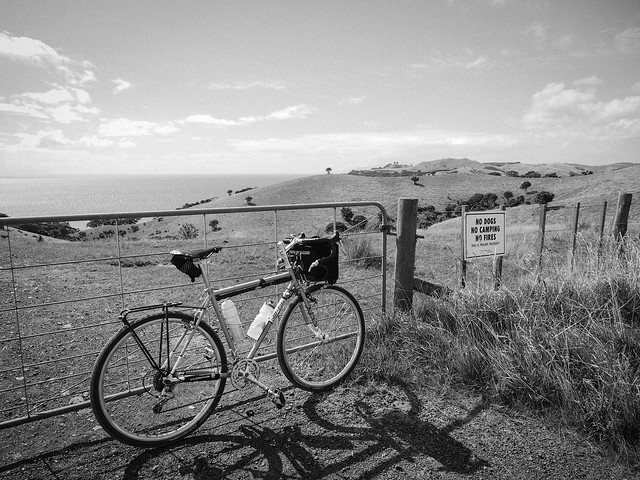 After finally making it to Stoney Batter, I wandered around for a bit, looked at the small concrete building surrounded by broken plastic chairs, mops and other detritus that was labelled something like “Visitors Centre” and was menaced by a sheep. 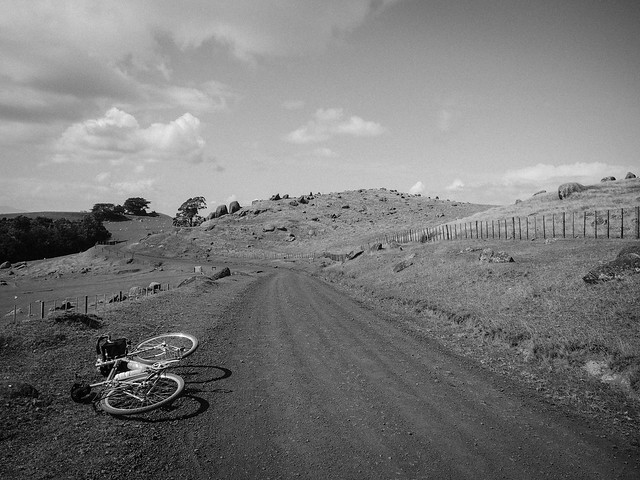 Riding back down that gravel road was much easier (which confused me at the time, but made sense when I looked at the elevation profile later). Although I did have to stop once to fix up my handlebars which had slipped round to face downward after one severe section of downhill washboarding. 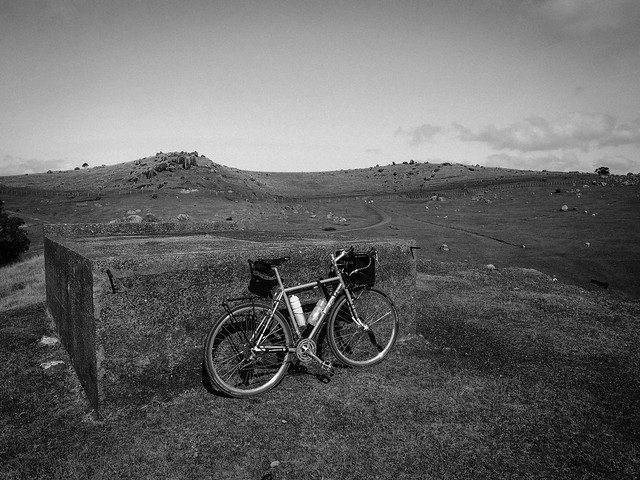 Now, I don’t think I cut an exceptionally athletic figure when I’m out riding – not so much greyhound, more old spaniel. But at one stage during my return journey, when I was slogging up a long hill toward Onetangi, a guy leaned out the window of a passing car and yelled at me – “You can do it! You’re nearly there! Good on you maaate!”. What? I thought. Of course I can make it – I do this all the time – dammit. 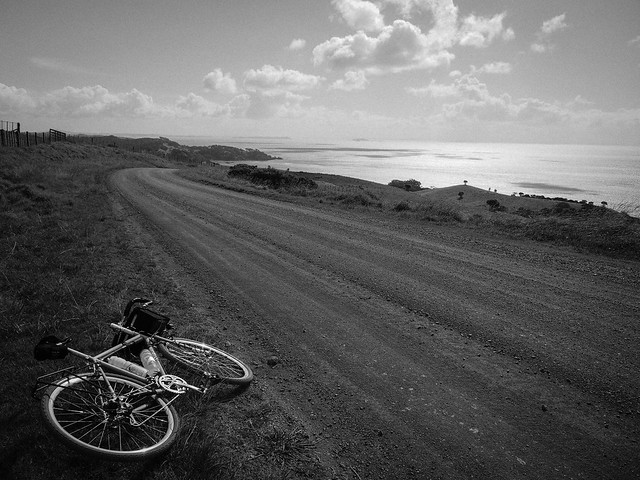 On my way back through the habited part of The Island, I stopped at the Waiheke skateboard park and had a quintessential Waiheke encounter – a couple of the local youth were trying to light a joint on the gas-powered public barbeque. They weren’t successful and asked if I happened to have a lighter on me.

The Bike performed well, and I just need to tweak a few things like the front brake & the saddle to make it ready for a new trip I have in mind.