When I mentally filed away the story of my first ride ride from Pukekohe to Raglan (and back) it was pretty straightforward. There was a simple arc to the story. In the memory I constructed, I was a hero – a tragically incompetent and poorly prepared rider, who suffers heroically before returning triumphant. I spent at least a couple of weeks afterward feeling different, a better person. I was a guy who could ride 250km in 2 days. Alone, without a map (and pretty much without a clue) on the open road. 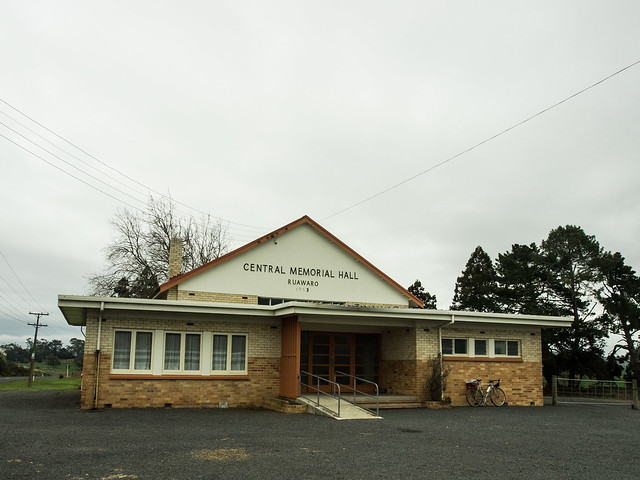 Six months later I was feeling more experienced, fitter, and housebound. Coup had been doing lots of travelling – around NZ for Team New Zealand trainings, and to Australia for The Great Southern Slam while I stayed home. How about another ride to Raglan I thought? I’ll take a different route and a different bike, I won’t make the same mistakes, I’ll do it better, faster even. 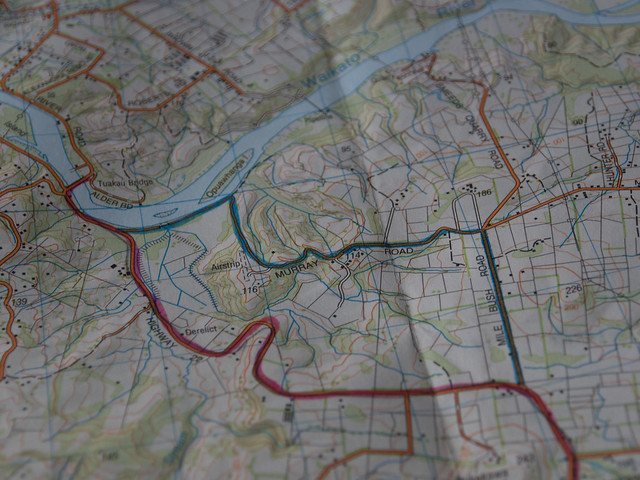 The route was mostly copied from The Kennets book again – they describe it as an alternative route, an “interesting ride”. I bought all the necessary NZ topo maps to cover Tuakau to Raglan, and marked the route on them with a pink highlighter. 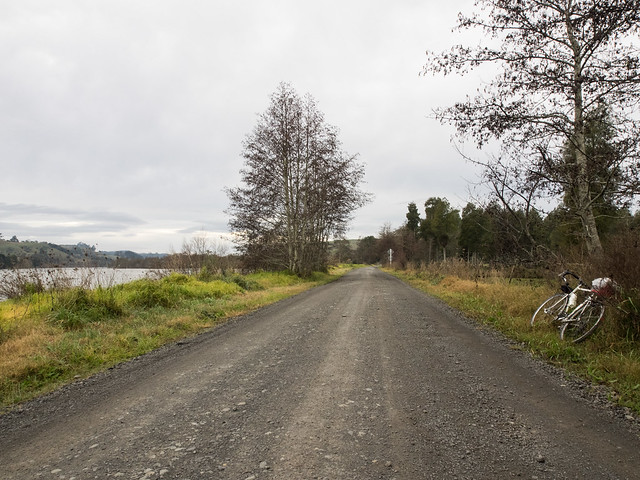 I left on a Monday morning train to Pukekohe. The feeling that I was escaping the city was reinforced by the way the train seemed to make it’s way through the ugliest parts of Auckland. The route alternated between droning motorways, sad backyards and industrial wastelands. Half demolished abattoirs followed acres of blank warehouses. Torn curtains looked out on overgrown lawns littered with broken toys. The only nice landmark was the guide dog training centre in Manurewa. 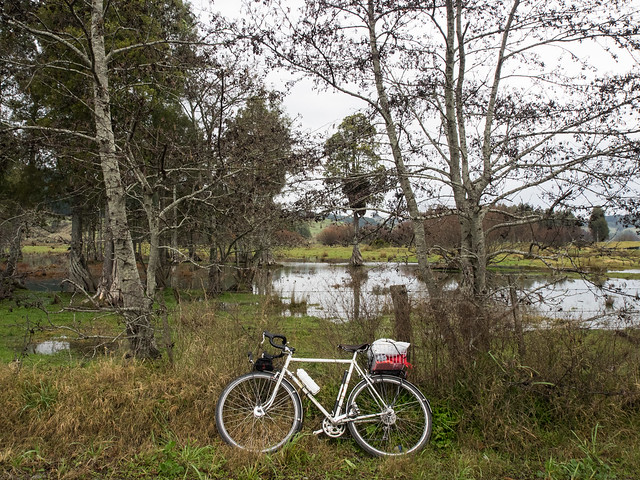 The first section of the ride, from Pukekohe, through Tuakau and across the bridge over the Waikato river, was ok. Then instead of heading straight up highway 22, I turned left and took some gravel roads – kind of a back way to Pukekawa. At the top of the hill I turned left and headed east towards the river, past the place where The Dukes of Hazard have retired to. It appears they are now silver nomads living in a bus handy to the golf course. 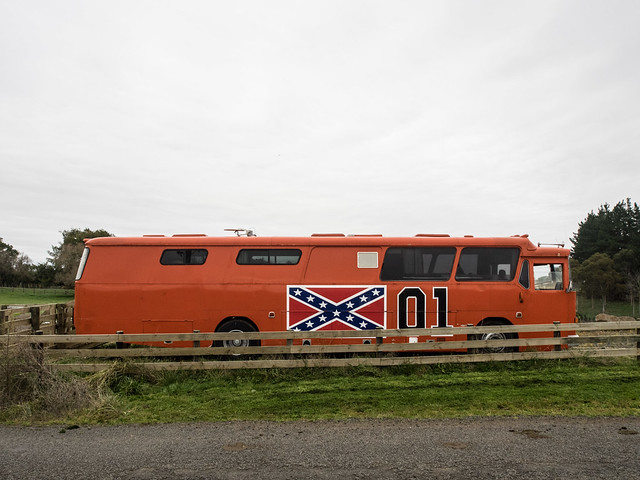 The weather was cold, still and overcast and the roads were very quiet. There were more animals than people around. Which is pretty much how I like it. Horses, donkeys, goats, turkeys (an enormous flock of turkeys in fact) and of course lots of cows & sheep. This turned out to be my favourite section of the ride. I saw a guy standing, staring in to a bonfire. He saw me and waved, he said “We keep pretty busy around here.” and laughed. “Indeed” I replied, because that’s what I always say when I don’t have anything to say. 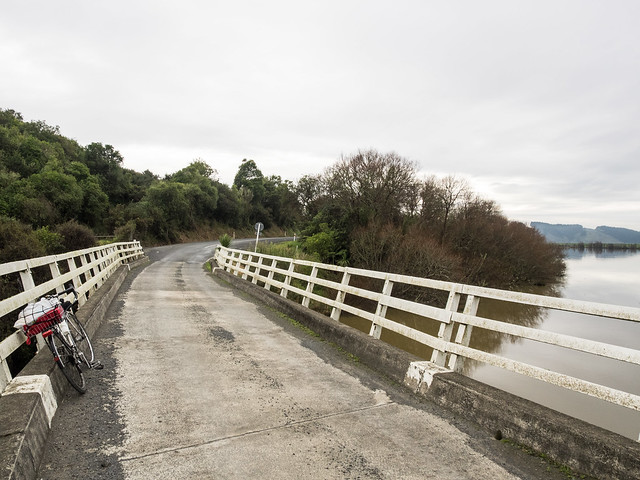 The roads got busier around the Rotowaro open cast mine. But it was still an interesting land mark I suppose. From the mine I rode west, through the hills. Past Glen Afton and the Waingaro Springs. Then I met highway 22, the route I had taken before. In my head it was a short ride, mostly downhill to Raglan from there. It’s not of course, it’s another 25km of mostly scenic rolling terrain, but they passed pleasantly. It had started to rain on and off by this point, but nothing too serious, and I arrived in Raglan tired but not exhausted, and with spare food and water. 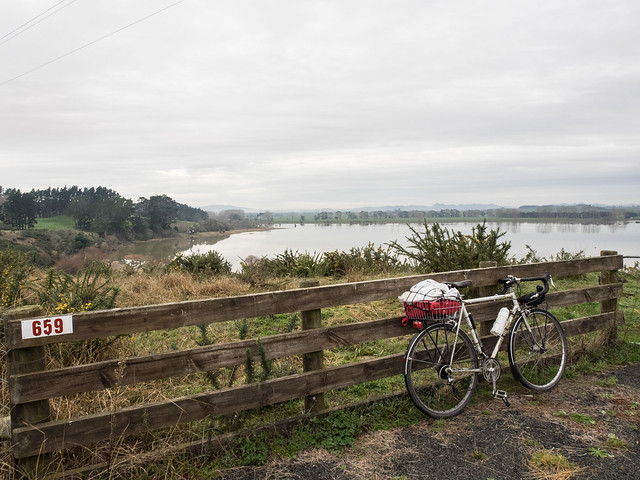 I watched World Cup highlights at the hotel in Raglan. Ate pizza, drank some beer and read The Book Thief for an hour before falling asleep. 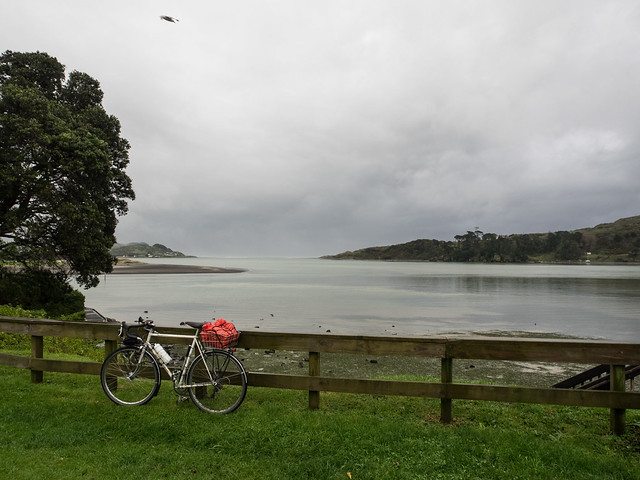 The next day, I took the same route back to Pukekohe. The weather was windier and rainier. On the Ohautira Road I saw several animal carcasses that had been picked clean. I wondered if this was the work of carrion eating birds. Or Bear Grylls. 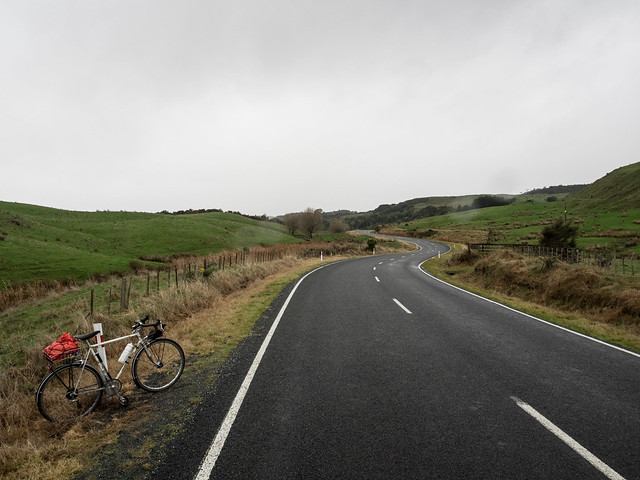 People often talk about one of the pleasures of cycle touring is that you have a closer relationship with your surroundings – you feel the hills, smell the trees, listen to the magpies. That’s true – but it’s not all good – you also see more clearly the rubbish that people drop. And not just the few bits flung out of car windows as they drive by. You see the big piles that people have driven out in to the country to specifically dump down banks and in to rivers. I hate those people. 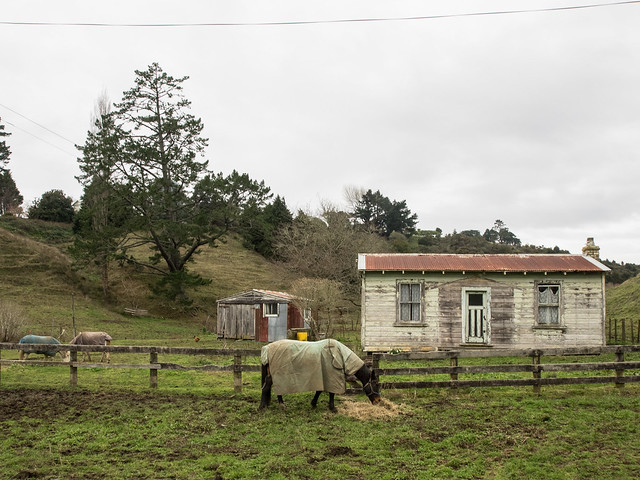 I arrived safely back at the Pukekohe railway station on Tuesday afternoon with a really sore arse but without a sense of achievement and it’s bothering me ever since. The sore arse I can take care of – I walked to work for the rest of the week instead of riding, and I’ve retired my ancient Brooks saddle. But I’m having trouble working out how to file away the memory. 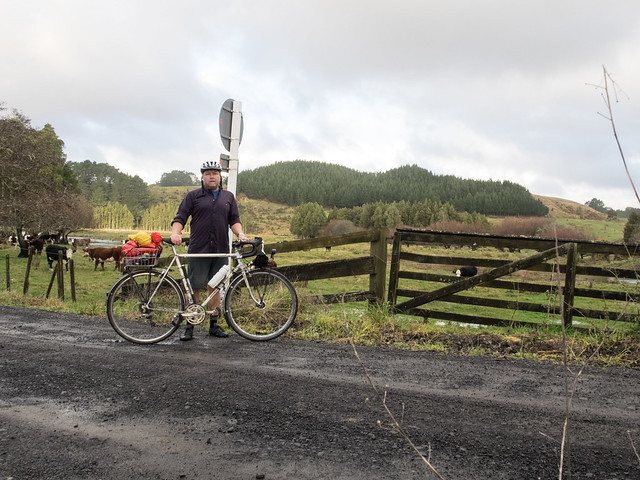 4 thoughts on “Riding to Raglan (again)”